…the LONGBOARDING LOCAL, who, after a tough week (evidently), paddled out at a spot, a fickle point break, where he considers himself a local, with a fairly obvious and focused attitude that he was there to surf.  I saw him paddle past me, mustache waxed, ready to rip, crowd be damned (okay, this is a judgement call by me, a guy whose motto is, ‘I’m here to surf.’)

DEFINITION- A Sociopath is someone who knows something he or she does is wrong, yet continues to do it. I’ve often thought all good surfers are sociopaths. This probably isn’t totally true, but what it takes to be good at anything is a certain competitive drive. To be good at surfing, an, admittedly, self-centered sport, increasingly, with more crowded conditions, takes a certain amount of aggressiveness. If I can stop just sort of confessing to being a sociopath, I will admit to being, at least in the water, aggressive. 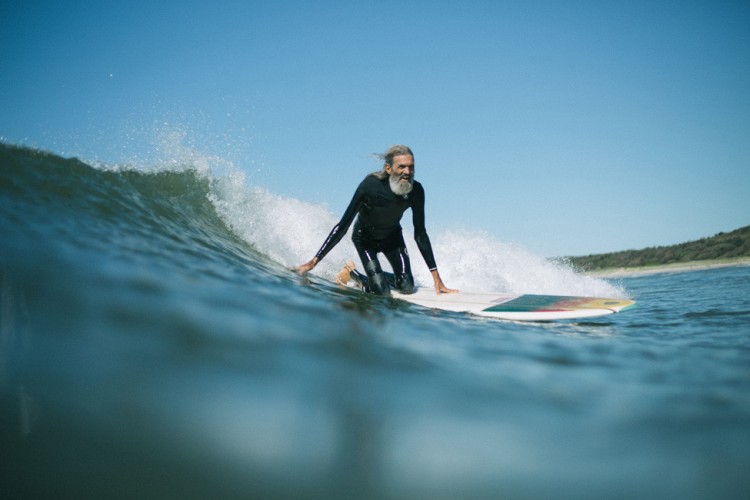 John Peck, a legendary surfer, somewhat older than Erwin Dence, doing (and obviously enjoying) a bit of kneeboarding. Photo by Nathan Oldfields. Find it, if nowhere else, at mollusksurfshopscom

DISCLAIMER (Or maybe it’s a ‘claimer’) ONE- a) If you can’t walk to a spot in less than, say, forty-five minutes from your home, you’re not a local. b) If you pay to park, you’re not a local.  c) Mitt Romney is a local at Windansea, Bob Dylan at Malibu. Or would be if they surfed.  d) The guy who lives in his van is probably More Local than you.                 SO, we go to ever-expanding circles of Local-ness; the above-mentioned Longboarder Local being Local-er than I am, with me being Local-er than, well, lots of people.  AND I have been a TRUE LOCAL several times; Pacific Beach, Encinitas; AND, some credit must be given for working in close proximity to surf. ADD Oceanside Pier to my local history; I worked two blocks and some railroad tracks away for over two years. OHHH, and add Lower Trestles; I worked up the hill, with a view of the place, and drove out on the beach every working day for ten months (an hour and a half lunchbreak, a third of it legal)  in 1975.

SETTING THE SCENE- I was actually, after getting skunked (or unwilling to wait for a possible properly-aligned swell/tide/wind/crowd combination), the first one in the water on this particular afternoon. And it was working. So, yeah, hurry, gorge it up.  BUT, too soon, others showed up. First it was two guys, friendly nods followed by the guy on the bigger board totally taking off in front of me. I didn’t freak out. I did, somewhat later, return the favor. SO, Even. THEN, more surfers showed up. ONE goofy-footer was totally ripping; down the line, under the lip, a few controlled freefalls. Everyone else was surfing. I, 65 year old guy with pretty screwed-up knees, was (and maybe this seems counter-intuitive) kneeboarding, taking off farther up the line, driving across. I was totally enjoying it. A longtime local, and the best kneeboarder on the Strait of Juan de Fuca who wears fins, someone who I first surfed this spot with (with as in, he was also out) in 1979, was catching some waves, always in the barrel. Hey, he was kneeboarding.

SO, on the first wave I saw ridden by Longboarding Local, he was driving, hit a section, lost his board. Leashless, Longboard Local’s loose board came perilously close to hitting (she would later say ‘decapitating’) a woman who would, a little later, catch one of the waves of the day. Longboarding Local seemed angry that he had to rock dance his way in.  OKAY, so it’s sort of badass to not wear a leash, but, in crowded conditions, PERHAPS sort of irresponsible.

NOW, I had actually gotten out of the water after two and a half hours or so, AND the surf had dropped, the crowd increased. BUT, my friend, who I’ve advised to deny any friendship, after surfing elsewhere, had moved to this spot, and claimed more sets were coming.  I went back out.  HE WAS RIGHT; after what was probably a 45 minute lull, a set approached, and I, inside, was paddling out. As were others. As was Longboarding Local.  The woman Longboarding Local’s loose board had nearly decapitated took the first one. Someone else, possibly her boyfriend, was on the second. I turned for the third. Longboarding Local was, I swear (judge or judges), still paddling out when I turned and committed. BUT, deeper than I was, he turned and took off.  I COULD HEAR YELLING (despite wearing earplugs and my right ear pretty much plugged, again, from the narrowing of the ear canals, that caused by bone growth, that exacerbated by surfing in cold water, that condition first diagnosed when I was 20) behind me, I could feel Longboarding Local’s presence. I pulled out as quickly as I could. These weren’t two person (or PARTY) waves. MAYBE Mr. Local would have made the wave. I’m certain he thought so. I caught the next one (yeah, guess there was another), cruised out of the possible-confrontation zone.

PADDLING back up the point, I couldn’t hear anything, but could see big arm gestures; L.L. making his case to my (although he doesn’t, as I’ve said, have to claim it) friend. WHEN I got even with my friend ______, he wasn’t entirely sympathetic to my explanation.

PRIORITY RULES (historically)- There was no ‘taking turns’ back when I, still thirteen years old, was learning to surf. A wave belonged to the surfer farthest out, closest to the peak. That was it. This was enforced through  peer pressure and intimidation, real or imagined. IF YOU wanted to challenge the big dog, you moved closer to the peak, farther out. IF YOU waited for your turn, you got one, occasionally. IF YOU wanted all the waves to yourself, you pretty much weren’t out on a great day at a great spot.  A LOT of surfing at a good spot (picture Swamis, late 1960s) consisted mostly of moving around, sharking the  inside, waiting for a wave everyone missed of someone fell on. SCRAPPING. IT IS a classic situation where someone sits too far over, can’t make the first section. OR, someone goes for a wave, you don’t, and that person does not catch the wave. AGAIN, differences in equipment have made this more of an issue than in the past; THOUGH, not actually catching or blowing a wave that then goes unridden, particularly if done several times, will not make anyone popular.

PRIORITY RULES (current)- No matter how many times I’ve had this explained to me, I still don’t get it. If I get a set wave and you don’t; and you’re waiting on the shoulder; I shouldn’t paddle out past you, looking for the next set wave? I should allow you to opportunity to go for it, unchallenged? It’s your turn. MAYBE these new rules are the work of surfers who… okay, I’m not going on about ‘participation’ awards and such things… these rules are, at least partially, the result of increasingly crowded conditions. AND they’re really more a WISH LIST than something adhered to.

OKAY, I have tried going by the new priority etiquette. Really. I know how painful it is to not go for the one wave in a one wave set. I had a brief version of this discussion with _____, acknowledging I’d done L.L. wrong. “Well, you could apologize.” “I could.” I paddled up the point, got even with Local Longboarder, apologized. “I come here to get away from this shit,” he said, his arm gestures a bit refrained in comparison to earlier. “We all do,” I said. Not sure if L.L. heard me as I paddled away, but I did say I was leaving,  he could have all my waves. I heard he settled down after I left. Great. Sorry, Longboarder Local. I owe you one.

*I’ve actually had a bit of discussion about this incident; the kind of thing that happens, one would guess, thousands of times a day around the world. But, I chose to write about it. If part of my point is that Longboarding Local overreacted, it’s easy to say I have also. “Okay.” AND, some have told me my apology doesn’t seem truly sincere; AND, in fact, almost seems like I’m burning the guy again. “What?” Anyway, I have decided to delete his name. If you just loved the pre-redacted version so much you printed up a copy, please burn that. Really. I’m sincere, here. Truly.

6 thoughts on “With Apologies For Burning the *(Now) Unnamed Longboard Local,”