Evidently my paint sales people remember my surfing stories; or some of them; tales of two foot waves and rocks and ear infections and surfers who, on hearing how great the waves were on a Saturday, show up at dawn on a Sunday when the waves are half as big. Yeah, I’m talking about Adam “Wipeout” James, who said he couldn’t think even about surfing while he had so much work that just had to be done.

But there he was, actually getting out of the water when I rolled up. And then he was too tired to go back out. And then he did.

And then, in position for the ‘wave of the (this particular, would have been average the day before) day,’ Adam blows the takeoff (he did well otherwise, other than an ‘off the back’ that was supposed to be a cutback).

Sure, it can (and has, and will) happen to any of us. There’s a penalty (worse in Hawaii, I’ve heard) for this particular type of incident, no doubt mentioned by me, possibly reinforced by Keith Darrock, one of the other surfers out this day (and the day before, and pretty much any time the place breaks), and someone who hates to see a rideable wave go unridden. “Wave of the day, Adam.”

Adam, though remorseful, nevertheless struck back. “At least I’m not a barrel dodger,” he said, paddling for the next non-wave of the day, watching to see if I’d challenge him for it.

“Barrel Dodger?” Pause. “Me?” Wait; let me think. Have I ever dropped low, under a falling section, rather than staying high, risking getting pitched into the rocks? Have I?

If I have, I won’t again. Thanks Adam.

I’m going to insert this into the piece, but, since I have enough folks who get a message, psychic or over the mysterious intranet, when I post something new, I’m putting it here first. I’ve got a secret (okay, letting you in on it) plan to get this to the WSL, which I love (and was watching earlier, before the Seahawks game started. Wouldn’t it be great if they did a little skit where…

…Hey, if you have some contacts… that’d be great. Greater. Also, I wouldn’t have finished the drawing if the surf had just cooperated and followed the forecast.

This is out of order, but I felt I had to go back. It’ll all work out…eventually. 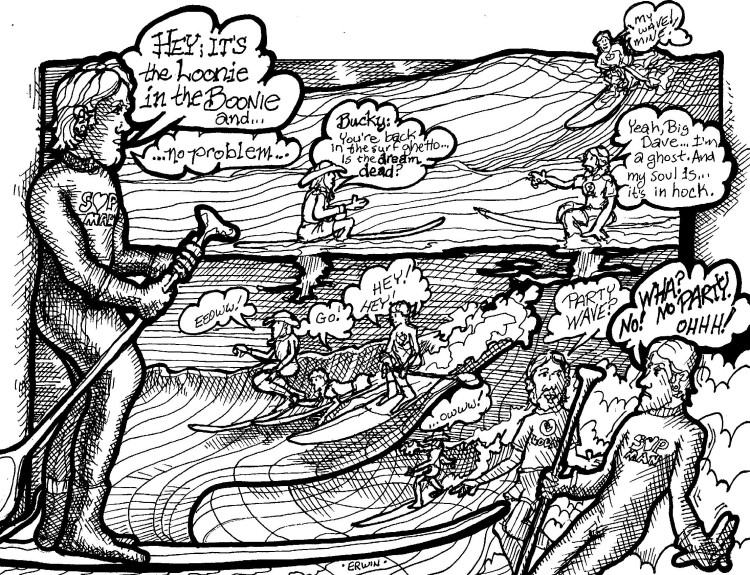 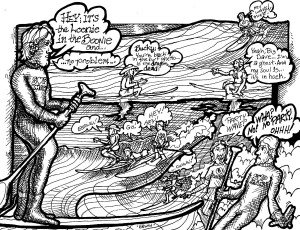 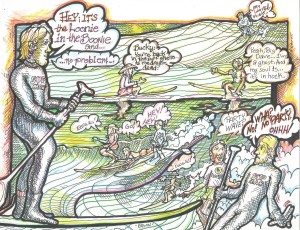 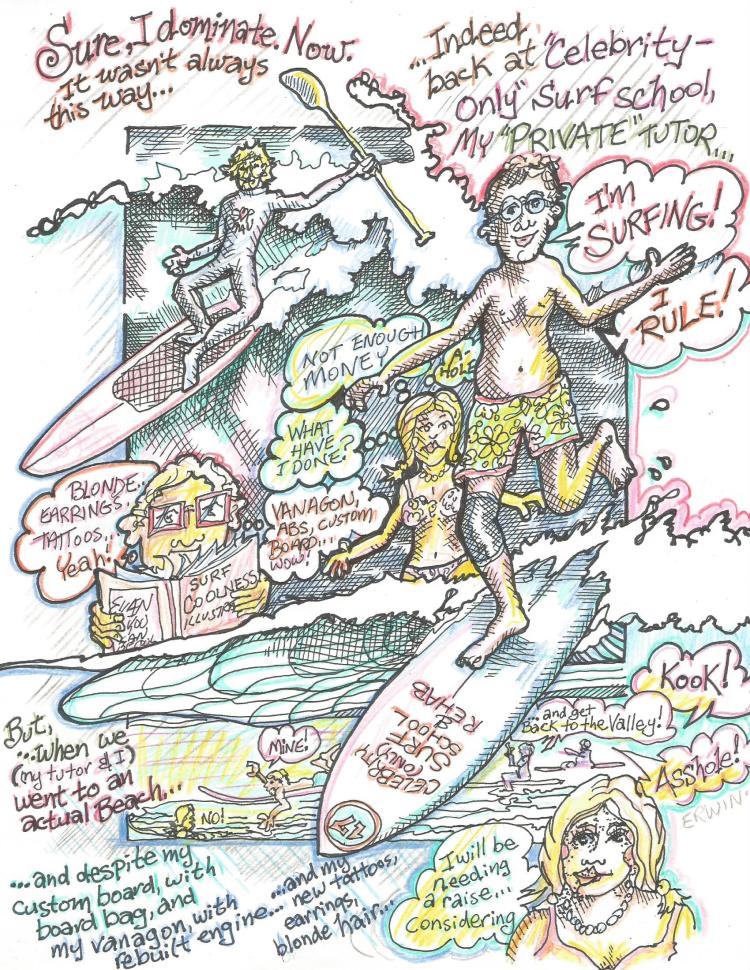 I found out how to put images on the site in different sizes. The medium size probably looks better, and the large size does enable the viewer to pick out mistakes more easily. I am trying to adhere to what I perceive as current comic formatting, but, as always, I just can’t help going somewhere just beyond those lines. There’ll be more; I’m thinking, thinking, um, uh, what?

Oh, here’s the black and white version; just because I saved it.

So, if you’re keeping score: SUPman’s nose got too much in the top image, the tutor is not attractive enough, and she just came out as a smudge in the ‘paddling/mine’ image. And, um, and I’m going to stop looking. NEXT TIME…