My sister, Melissa Lynch, the real artist in the family, scolded me for being in any way apologetic for my drawings. Yeah, well; I would like to be honest. If I could capture the building blocks of always-moving water, figure out how to weave a seamless shadowed/reflective/glimmering/black/white/multi-hued image I would. 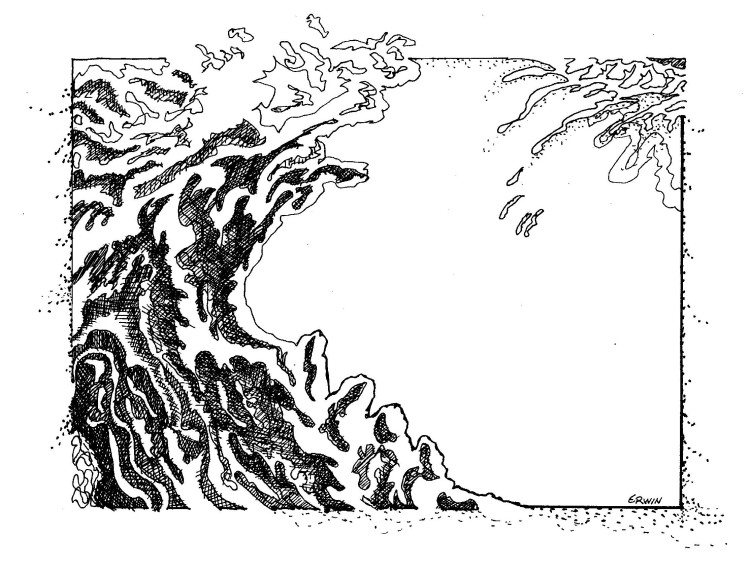 Since I can’t; yet; I’ll keep trying.

Meanwhile, I’m still in the thinking-it-through phase of a piece I must write under the working title of: “Are All Surfers Sociopaths; or Just the Good Ones?”

Three Acts: ACT ONE- several highschool surfing buddies and I surf Swamis after school. The only other surfers out are three (also high school age) members of the Surfboards Hawaii Surf Team. On the drive home, my friends complain they couldn’t catch any (or enough) waves. I hadn’t noticed, being busy catching waves and watching incredible longboard surfing. ONE, PART 2- One of my friends (Ray Hicks, most likely) points out (I think this was the day I ripped out my pants and had to borrow a pair of Levis from Billy McLean) that, when encountering other surfers of about our age, I seem to puff out my chest. “Maybe you’re intimidated.” “Yeah; probably.” “It’s, uh, like a gorilla.” “You mean, like, primal?” “Yeah, probably.”

ACT TWO- During the last week of my job up the hill from Trestles, taking an hour and a half break during my half hour official lunchtime, some surfer (I’ve always believed he was a Marine Officer) burned me and everyone else (I still got some, but not as many as usual waves). When I checked back at my half hour afternoon (supposed to be ten minutes) break, the guy was still out, still burning surfers mercilessly. I didn’t hate him; maybe he was going somewhere sucky, where a rifle was mandatory, for a while.

ACT THREE- My friend Stephen Davis, last time I spoke with him on the phone, mostly about his upcoming trip to the Oregon Coast and the chance I might meet him somewhere (probably won’t happen); had to, (had to) mention how I fell out of favor with many members of the Port Townsend surfing crew (very unofficial) because, over-amped, I (accidentally, I swear)wave-hogged on a day almost two years ago. Two years ago. Jeez. When I mentioned this on the phone this morning with Keith Darrock, and that I’m no more a sociopath than he is, and I do have empathy, whatever that is, he had to (had to) mention his observation that I’m kind of loud and possibly abrasive (see how he was tactful about this?) in the water, and, also, incidentally, I do seem to “kind of strut in the parking lot.” “WHAT? ME? No, it’s just being friendly.” (I am laughing at this point, but, also, thinking. Is he right?) “Like a rooster. And, oh,” he adds, has to add, “You kind of stick out your chest. And…and it seems like you want to dominate (I’m adding ‘even in’) the parking lot.”

There is no ACT FOUR where I try to change my ways, get all friendly and nice; empathize with those who won’t (before hand) or didn’t get enough waves. Empathize. I did tell Keith I’d rather attempt to empathize than be one of those who didn’t get enough waves. Maybe they’ll get points toward sainthood. No true contrition. Sorry. At least not so far. But, I am thinking; and since I can’t afford professional help, I’ll have to self-diagnose.

STEP ONE-“Yes, it’s all true.” See you in the parking lot. 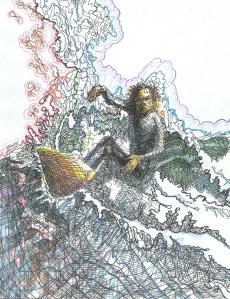 At the height of a projection, the speed of the original drop used to get to this point, down the line and up into the thinnest part of the wave, hanging, suspended, the right hand holding nothing more than a level, the left hand only holding balance when and where there is none without the speed itself…hold that weightlessness… hold it.  When the hand opens…

ACKNOWLEDGEMENTS: The drawing is based on (as opposed to copied from) a photo of Keanu Asing competing at Lower Trestles during the recent Hurley WQS event. I looked through eighty photos supplied by the World Surfing League, airs and rotations and cutbacks and… at this moment, on this ride, there are choices. Were choices. I can imagine an adjustment that allows a freefall from the lip, even a tuck into the pocket. I can imagine a cutback into the whitewater.