FIRST, let me say I’ve been doing drawings of what amuses me for a long time. Somewhere in the early eighties, bored with my Civil Service job as a painter at the Puget Sound Naval Shipyard in Bremerton (having transferred her from the Public Works Center at 32nd Street Naval Station in San Diego as soon as I could after they moved/promoted me from a temporary to a Career-conditional employee), I, along with working on a novel (during breaks/lunch- mostly reading new stuff to other bored workers), put together a little collection of cartoons under the loose title of “Absurd Delusions.”

None of my co-workers thought any of the cartoons were funny.

The caption is, “Okay then; drawn ‘for’ the “New Yorker,” not “in” the “New Yorker.”[optional] I also have some that weren’t ‘in’ “Playboy.” ” A reasonable explanation for my new drawings as I solicited feedback.

SO, HERE’S THE DEAL: A couple of months ago, while working on my Realsurfers Coloring Book, and possibly because I’d heard that several cartoonists for the “New Yorker” had died recently, but mostly, probably, because I (along with thousands of others, no doubt) got an e-mail from Bob Mankoff, the cartoon editor, inviting me to get more involved with the magazine (I had entered the caption contest a few times; never really came up with a killer line for anyone else’s work- gave it up).

WELL, sure. I had a few ideas, found out the submissions are all handled online nowadays, e-submitted, maximum of 10 original cartoons per month, nothing that had been previously published, even in a blog/website like this one.

I just submitted my second batch of brilliant cartoons on the 14th, so, though I never received confirmation that they hate/dislike/don’t get/ don’t want any out of the first set, I’ll have to assume it’s safe for me to display some of them here. 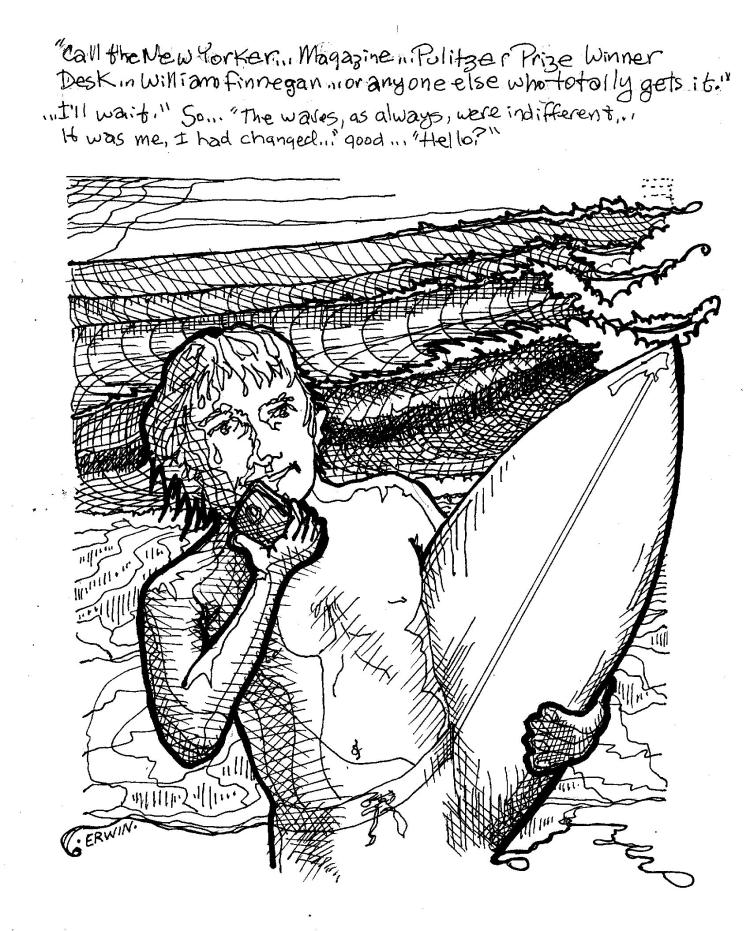 Big fan of “New Yorker” staff writer William Finnegan’s Pulitzer Prize-winning book, “Barbarian Days;” a surf-centric biography by a Real writer who lived/lives a real surfers life. I was kind of hoping someone in the cartoon department might just… you know, pass it on. If not, expect to see the “I was different” line again. And, yeah, there’s some kissing-up obvious, some jealousy quite possible. Port Townsend librarian Keith Darrock, and I, having already solicited legendary surf writer Drew Kampion for help, are hoping to persuade Billy Finn, Finn-o, to participate, even if it’s by Skype (my backup plan idea) for the Third Occasional Surf Culture on the Strait of Juan de Fuca Event.

ACTUALLY, one of the first drawings I did was an update on the classic R. Crumb “Keep On Truckin'” drawing, imagining the character 48 years later. I thought of this, possibly, because my drawing style, cross-hatch-based (though I claim to have made some kinetic line changes), and which anyone old enough and real surfer enough to remember it, is directly linked to the “Surfer” magazine drawings by Rick Griffin. Still, my style is often compared to that of Mr. Robert Crumb, a contemporary of Mr. Griffin’s in the “Zap Comics” and ‘underground’ era of the late 60s.

SO, I wasn’t planning on doing this right now, maybe still hoping the “New Yorker” will come to their senses, but, since I’ve gone this far… No; I’ll give them a few days. I did write to Mr. Crumb, seeking his permission to use his image. When I got this response I was… I was so thrilled. So thrilled.

HMMMMM; I have to re-scan Mr. Crumb’s email and my response. That means setting up the scanner and… I’ll take that as a sign. Not really, but I’ll update this in the morning. No, really.

I’ve been working quite (surprisingly) hard recently, doing some writing; some drawings; some cartoons, some of which I hope might show up in “the New Yorker” (and all will undoubtedly, eventually show up here); and shipping off and working on the realsurfers coloring book. My sister, Melissa Lynch, has been helping spread the word on Facebook.

With the difficulty in convincing anyone to have painting done this time of year, the surf either not happening or not at the right angle for anywhere close, the ground frozen and the temperature brutal, I’ve been trying to do what I can to advance my artsy career, such as it is.

Still, I’m behind on my (okay, once, I’ll call it a…) blog. I have some news and some photos from Hydrosexual Stephen Davis, last heard from wayyy down in Baja, and have some new drawings to add to existing stories “Inside Break,” and “Locals Only Kooks Go Home.” I am working on editing the coloring book down to 48 total drawings (cheaper to ship), checking into setting up a PayPal deal so people can buy the book, and cleaning up my site. Keith Darrock may be helping me with this (we’re negotiating). Keith, Associate Librarian in Port Townsend, is also working on planning for the Third Occasional Surf Culture on the Strait of Juan de Fuca Event. We’d love to get William Finnegan, Pulitzer Prize winning journalist and author of “Barbarian Days,” involved, live or (maybe, even) on Skype. If you have any influence (and we’re reaching out to surf journalism legend and Surf Culture headliner Drew Kampion for help) in getting (just guessing at his surf nickname) Willy Finn involved; yeah, use it.

So, shit’s happening; and if you’re promoting/linking/doing anything that’s helping, thank you. Since the start of what may or may not be a virus, Trish, long stating that Facebook is her thing, not mine, has been helping get some stuff on the Facebook site our daughter, Dru, set up. I think I’m at Erwin Dence, Jr, Facebook-wise, and I’m also at realsurfersdotnet@gmail.com.   So, thanks; I’m getting back to work. 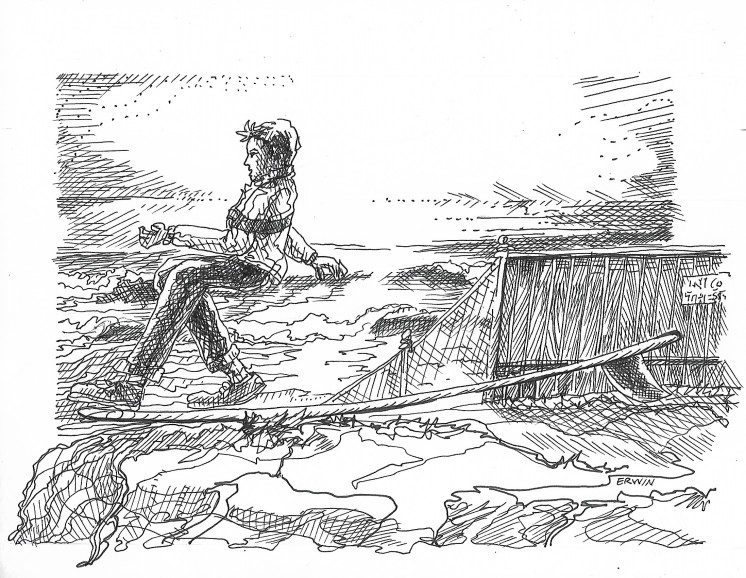 …the first one, ever; goes to William Finnegan for “Barbarian Days.”

I’m sure he would be stoked. Okay, maybe mildly amused. Maybe just cool about the whole thing. I just heard the last of the hourly NPR newscast the other day, announcing the winner of some award. Didn’t hear what award, but something literary.  I was excited. I called up Port Townsend librarian (and surfer) Keith Darrock, who had saved the book for me when they got it in. I may have been the second one to check it out. My friend Archie Endo also mentioned the book was out. Real life surf writer/editor Drew Kampion endorsed Finnegan as a writer, quite impressed he had written a two issue (unheard of in its rarity) “New Yorker” piece on Doc Renneker, legendary surfer. “Yeah, he’s legit.”

“I don’t know. Maybe it’s the Booker Prize. Don’t they have something like that?”

No, I found out; it’s the Pulitzer! Whoa. Now, that’s something.

It might be that part of the reason I loved the book so much more than some other books on surfing I’ve read, or started to read, or scimmed and abandoned, is that Mr. Finnegan is a real writer; a really good writer. And…he’s been there; surfing and other war zones; and he can maintain a coolness that most of us cannot; he can put into words what we can feel, not explain, and yet recognize as authentic. Passion and critical situations are sometimes best described from just a bit of distance;  with the right amount of objectivity. “Yeah, that’s it. He got it right.”

The explanation for why the book had a bigger impact on me than it seems to have had on Keith is, perhaps, that Finnegan and I are contemporaries. I looked it up, he’s actually a year younger than I am; started surfing at a similar time. He is able to describe the beginnings of what his reviewers always seem to call “a lifelong passion;” trying to learn, to improve, to fit into whatever tribe one finds himself among.

While he was exploring now-well known spots around the world, I was surfing now-way-more-crowded spots in a less crowded Southern California. That doesn’t mean I don’t want to hear how that went for him.

I actually was impressed enough to hold off of returning the book after I’d read it, asking Keith what would happen if I went over the deadline. And (this is actually unusual) I watched a video of Mr. Finnegan doing a reading at some event in New York City, with non-surfers making up most of the audience.

And he was cool; not talking down, now rolling his eyes, not even, noticeably smirking as he looked back to the page he was reading.

I have to admit I take some (probably improper) solace in knowing that, possibly to make up for his wanderings during his youth, he’s still working. Of course, when he’s not, he might be snagging a few tubes at Tavarua, staying at the now-known island, with a real bed and untainted water.  So, a minor honor, indeed, but the first ever “Real-ly” is for you, Mr. William Finnegan, Jr.