The surf report and forecast for the Northwest portion of the contiguous U-nited States of A-merica (dashes added to more closely reflect prideful way we pro-nounce stuff) is pretty bleak. You’d have to believe the Pacific Ocean could churn up something more than a two foot swell.

Hey, it’s summertime. Painting season. Hydrosexual Stephen Davis and I, both of us drinking coffee, were each sitting in doorways of our vans, paint gear spread around. I asked him about water temperatures in Baja (last fall) and Hawaii (this last winter). “Oh,” he said, “Baja was right between trunking-it and wetsuit temperature; probably 66 degrees or so.”

“Oh,” I said. Pause, both of us nodding our heads. “You know, back when I was a teenager…” Now Steve was trying to avoid rolling his eyes. “…when the water temperature got up to 58 degrees, somewhere around Easter; if you were still wearing a wetsuit… and bear in mind we only had shortjohn wetsuits… you were a pussy.”

“Uh huh. Pussy.” “Really. And you couldn’t put one on until it got back down to 58, somewhere around December; before Christmas, anyway.” “Uh huh.”

What I didn’t bother to tell him, but probably drifted off into remembering, was an early summer morning when Phillip Harper, Ray Hicks, possibly Mark Metzger and Billy McLain, and I; no doubt in two cars from Fallbrook, all hit Swamis at about the same time.  I was first down the stairs.

I surfed Swamis enough from 1965 to see the basic reef, sort of fanned, overlapping shelves, hold up while the shoreline would change more dramatically; erosion, refill. Seasonal. The wave conditions went from one high tide peak too close to the bigger rocks; to mid-tide and two distinct peaks; to ultra low tide, one running crazy and almost hollow wave; from the December ’69 swell; through dawn patrol, after school, between classes-at- Palomar and work-in-Oceanside sessions (pre-1971); to the times I lived in Encinitas (’74-’76) and could sneak in a few; to New Years day ventures while working in San Diego because I didn’t have work in the Northwest (1991,’92); everything from Santa Ana mornings to south wind chop, onshore, glassy; overhead to flat; overcrowded to almost empty; with so many memories… they’re all memories now; haven’t surfed there in twenty-five years.

On the particular morning I was remembering while talking with Steve, shadows of the bluff extending into the water, there was a chalk board on the still-empty lifeguard station. “Surf 2-3, water temp- 66.” Whoa! Warming up! We would probably end up surfing what we referred to as Swamis Beachbreak, the quarter mile or so between Swamis proper, and Pipes, pretending there was a better lineup off this rock than off that. “Hey, I WAS on the nose!” “Hey, did you see that rollercoaster?” “Hey!”

I hit the water straight out in front of the stairs, caught a left just as my friends hit the sand. “Hey!”

Not that Stephen would be all that impressed. “Uh huh. Do you have any more coffee?”

“Uh. Um. Yeah.” I’m certain many of us will look back on the times we went searching for waves on the Strait. Sometimes it can be… “Waves?” “Waves? No, I got skunked.” “Then why are you smiling?”

THE LATEST version has 56 drawings, ready to color. AGAIN, I didn’t draw with a coloring book in mind until recently, and, perhaps, I’m now simplifying the lines a bit, allowing a bit more blank space. MOSTLY it’s a way to get my work to an audience that probably has walls filled with surf photos, posters, paintings; coffee tables stacked with coffee table surf books, shelves, maybe boxes filled with old surfing magazines.

HERE are a few examples: 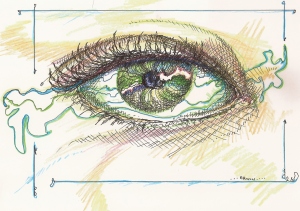 OKAY, I added a couple of colored-in drawings two that aren’t in the book, kind of as an example. I’m still figuring out how to market the book. Sales is not anywhere near my comfort zone. I’m checking out Paypal, getting some copies ready to, hopefully, sell at the Surfrider Cleanwater Surf Contest in Westport in a couple of weeks.  The plan is to contribute a couple of bucks from each one to the Olympic Peninsula Chapter. We’ll see. MEANWHILE, I’d be happy to mail an autographed copy to anyone willing to send $20.00 to Erwin Dence, P.O. Box 148, Quilcene, Wa. 98376.  OR, maybe you can contact me at realsurfersdotnet@gmail.com

I was showing someone the first run of the RealSurfers Coloring Book, and couldn’t help but notice; probably because he pointed it out, that I have quite a few illustrations of women, but only one of a woman surfing. I almost said a girl surfing, and, in fact, did title this “Girl (actually) Surfing Illustration.” Whoops.

It’s part of the myth/fantasy/history/tradition, I guess; and, having just hit 65 years of age, I probably should also stop thinking I’m not 46 years or so removed from being anything like a surfer boy. Surfer Girl, Surfer Boy; nope, doesn’t even sound proper.

This is a slightly-altered version of a drawing already posted. Trish asked me if it was a woman or a man. “She needs a little more… definition.” Okay.

Still, I do prefer a woman who surfs with flow and grace; Margo Godfrey Oberg, Jericho Poppler, Stephanie Gilmore; and, sure, throw in a few carves and power moves… no matter how manly a ‘man hack’ sounds, it’s all done on water. Water. Woman.

This week, men and women, boys and girls; I’m promising myself that I’ll get to the Printery. Not Monday; it’s a holiday, and I do have to go down to my Dad’s, and I do have a lot of work… this week.