I recently got an e-mail with the heading, “Moving On.” It was from ‘Hydrosexual’ Stephen Davis, who, incidentally, is my Wal-Mart call (like a drunk call, but mostly because I have little to do in Wal-Mart except follow Trish around and try not to whine, and because it’s usually late enough here that it’s somewhere around 4:30, 5 on the big Island). Included was this, one of several paintings he’s working on before he, um, moves on.

So, Steve has several options, but what he’s evidently doing is going to the Chicago area, helping his friend Cosmo get his (Cosmo’s) house ready to sell. Evidently, again, Cosmo visited the Big Island long enough to decide he might have had enough of being a landscaper in Chicago’s suburbs.

Okay, this is a couple of Wal-Mart calls, and, hopefully, a few more volcanic reef surf sessions away, so, if it changes…

MEANWHILE, Mikel “Squintz” Cumiskey is moving on, back (but not yet) to the wide open and fertile (compared to the Strait of Juan de Fuca) surf grounds (surf sands?) of Florida.  BUT, he hasn’t quite left yet, and sent me this photo of a recent attempt to find waves around these parts. 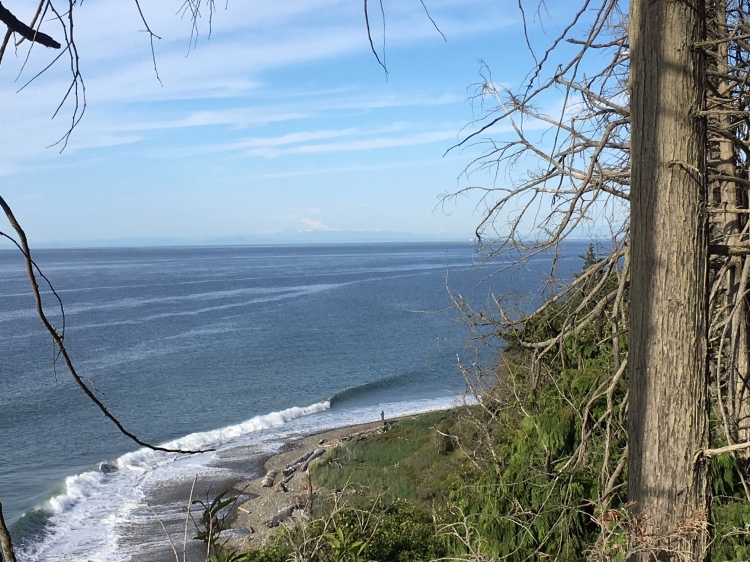 This was his second long hike/slide/belly crawl/in of the day, and, one, that’s part of a log at the point, two, if he’d actually continued to the beach, the odds of cops being called were pretty high.

No, I’ve never never surfed there, but, interestingly, I have met the woman who thinks it’s her ultra-important task in life to prevent anyone (and she doesn’t own the land) from enjoying… well, this; waves wrapping around just another point. I did ask the woman, who was friendly enough with me when I was painting on another property she did landscaping on, if she’d call the cops if I happened to, you know, maybe try to… “You betcha’,” she said, with an Annie Oakley smile.

Good luck, Squintz and his wife and child. No, I didn’t give Mikel that nickname; but it’s just too good not to use.

MEANWHILE, I managed to sneak in a little drawing time. 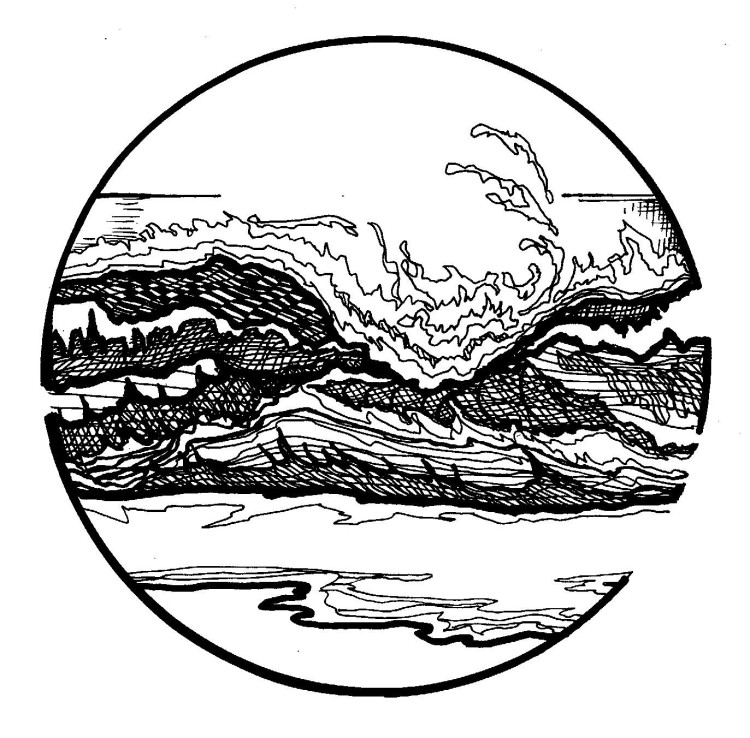 I did refresh the stock of framed prints available at DISCO BAY OUTDOOR EXCHANGE in, obviously, Discovery Bay, AND I’m working with Tyler Meeks (and with Mollie Orbea of Orbea Signs in Port Gamble) on some t shirt designs.  Trying to keep it simple.

Meanwhile, as always, looking for signs of swell, scamming on how to adjust life so it wraps around, lines up, gives one a swoop and a carve, and, yes, moves on.

It’s a bit of a, I don’t know, irritating thing, to me, that, despite planning out an illustration, thinking it through, actually picturing it in my mind; once I check out reference material, once I start drawing… it comes out…pause… different.

Here are two drawings (please, just because of the fragility of my ego, don’t call them sketches) I finished today. I’ll let you in on what I hoped for after this: 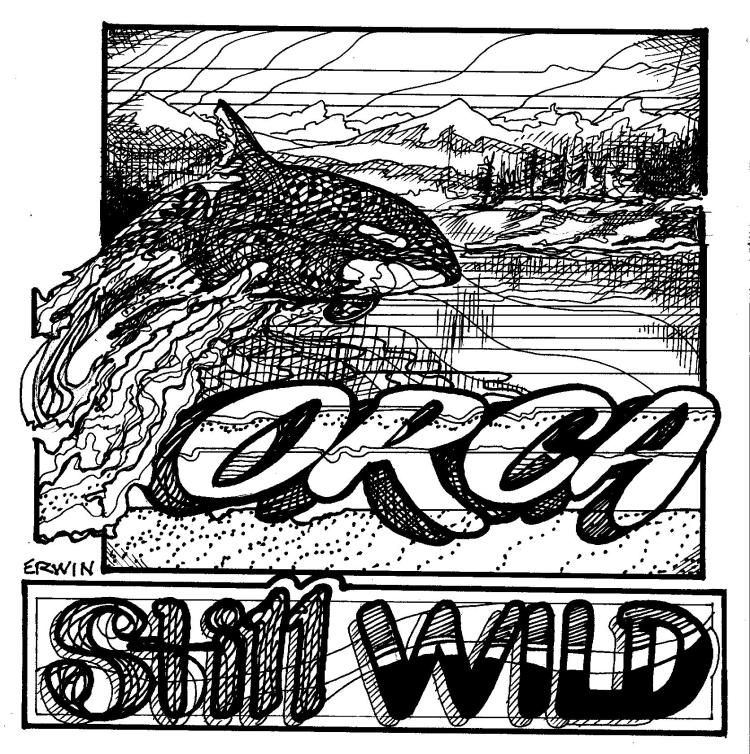 Simpler. I was thinking of the way photos, back in the early 70s, mostly, late 60s, were broken into three shades (dark, mid-range, and light). Psychedelic? Maybe; depends on the colors selected.  Next time. I’m kind of at the ‘still wild’ phase (“Still Wild period- not sure); and, based on advice from some guys who purchased some of my work (thanks Dave and Joey), I am kind of making my name a bit larger. I’m thinking of going with “Original Erwin.” Branding.

Ego. And, yes, Doctor; maybe doing an Orca is some pathetic reaction to Stephen Davis selling his whale painting (check’s in the mail); AND having some (quite a few) commissions for more original Stephen paintings.

Maybe a little. I have wanted to do a drawing of an Orca for a while. I also wanted to write something about a recent suicide slab session I observed, rather than participated in. I did give kudos to those brave souls who risked it, each one paying dearly for a (precious) few quality rides.  Not really wanting to be the observer, on this occasion, not participating may have been the right decision.

OH, this is the day following the above post. My new stuff goes to twitter and Facebook, and, evidently, C.L. Flint is a follower (wait, maybe he’s a Friend; and, yeah, I do know him in real life) and commented that I should finish the killer whale, as in add the rest of the Orca (he called it a fish. No). So, I did. Now, I do think it’s sort of clever to have part of the drawing outside the frame (it’s my ‘outside the frame’ period). In this case, maybe C.L. is right. Here’s a side by side: 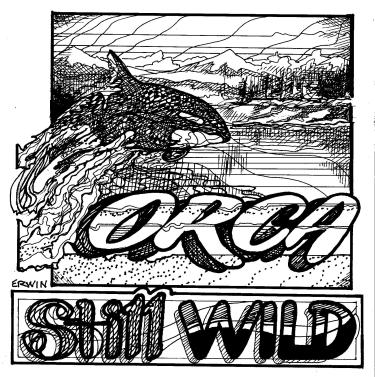