Sure I would; but what if the waves get over two feet?

When I traded out five hundred dollars left on a painting job for an eleven foot SUP a few years ago, it was never my intention for this to be my go-to board for surfing on the Strait of Juan de Fuca. Now dinged to shit and weighing five pounds more when I get out of the water than it did going in (I’d fix the dings but I keep thinking it’s not my go-to board), it is, indeed, the board that fits the conditions. That is to say, if I didn’t have it, I’d be walking out on the reef, looking to the heavens, watching perfect little peelers not quite clearing the rocks, and pray (closer to asking, really) for just another foot of wave height. It has happened. A lot. That is, the asking/praying; the increasing swell, not so often.

The undervalued part of riding a standup paddleboard is, that, while it does enable a surfer to catch waves outside of the normal takeoff zone, and outside of other surfers, it also enables surfers to ride waves even a longboarder couldn’t get into. So, as happened just yesterday, when I pull up to an empty beach pullout, look at empty-but-barely rideable waves; and, though I’d hope for another foot of wave face, there was no doubt I’d be going out. “It’s practice” I tell myself, and others, “for when it gets, you know, bigger.” My motto is, after all, “I’m here to surf.” It’s the riding of waves that matters to me. 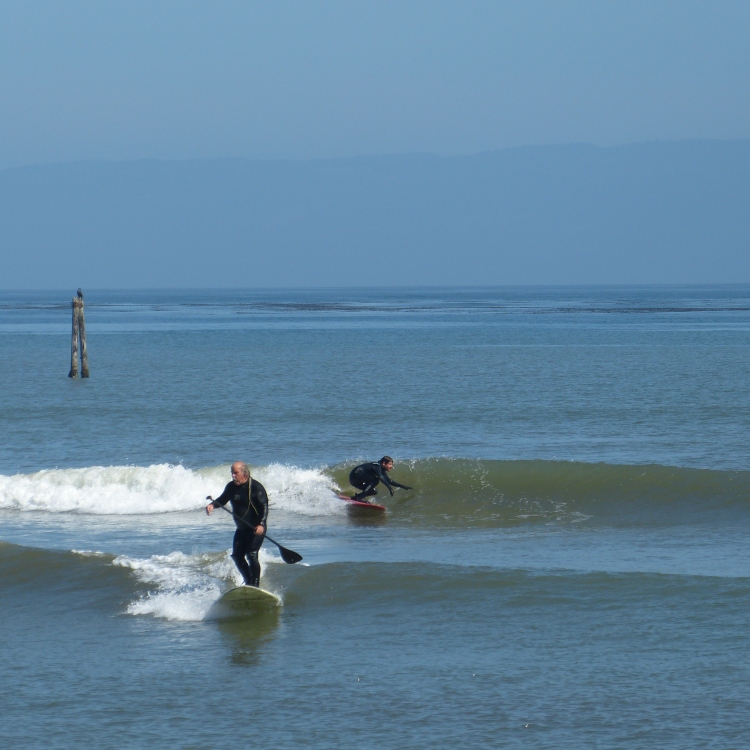 That’s Keith tucking into the outside bomb as I contemplate a move to the right with a move toward the nose. Really. Keith described the waves this day as ‘kind of weak,’ but went out anyway. The question Keith and I ask each other when waves are borderline flat, is, “Would Rico go?”  Rico (Moore, I think) moved to Port Townsend, surfed even waves I wouldn’t make a try for. When he broke one of his fins on the rocks, he fashioned an embarrassingly crude one out of wood; then broke that one off (lots of big rocks, some popping up in the waves). Rico has since moved to Maine, probably  (hopefully) going on a few thigh-to-knee rollers there.

No, I’m not so stoked on posting these photos of me. I’ve put it off, but, since I’ve lost, like, three pounds since these were taken by Tim Nolan, who also would go on any size wave, here they are. Meanwhile, once my go-to board dries out again, maybe I’ll find some time to patch those dings. Oh, and I promise, no more shots of me unless it’s head high. Okay, chest high. And now I’m hoping and praying for overhead. However, if I can catch a wave, I’m going. 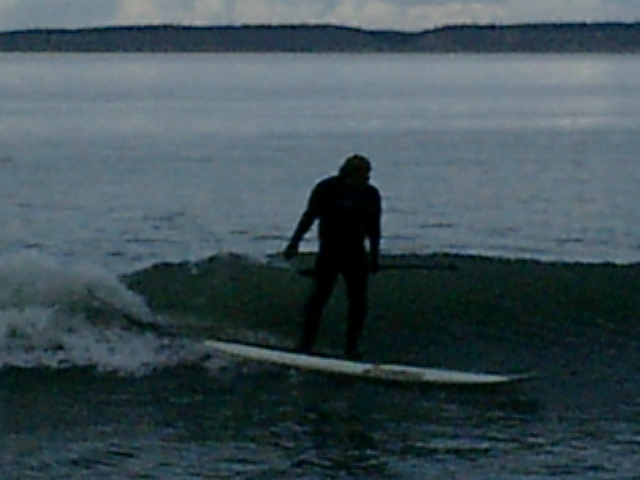 Archie Endo shot this one. It’s, like, waist-high, right?

With a little time, I’ve gotten over (some of) the guilt I felt immediately after taking more than my share of the waves that, all so rarely, find their way deep into the Straits of Juan de Fuca.
In my defense, there was only one other surfer and a kayaker when I went out on my SUP.
AND I didn’t want to be intimidated by the kayaker.
AND the waves were pretty small when I did go out.
AND, I am 62 years old, eligible for Social Security, senior discounts…
AND I can’t help it that so many other eager surfers came out AND the waves came up…
AND, still, I was still ‘circling,’ taking off farther out and over, repeatedly taking off farther over and out, riding all the way to the shorebreak, where the choice of trying to pull out, pull through, do a ‘fall back,’ or sideslip onto the sand was dependent on whether the wave was still barrelling.
Many were.
I had my leash ripped off twice, my connecting tie to the board broken once, got thrashed several times, and actually pulled out a couple of times.
Very hard to do a standing island pullout on such a floaty board.
So, I did wave hog to the top end of my ability, I did take more than my share of waves.
I did probably irritate the local surfers.
I confess these sins, hope for forgiveness; and must admit that I have committed this same sin in the past.
AND I must add I may recommit.
Many thanks to my friend Archie Endo for taking this and other photos, some providing proof I gave a lot of room to Cody when he took off behind me.
I could say, as part of my ‘guilty with an explanation’ plea, that seeing a camera when I was already frothing, Archie and I having been skunked farther out the Straits on the same day, hearing numerous phone reports of epic conditions, and having several irritating delays thrown in, including a bear raiding our storage locker for bird feeding (old people activity) did add to my being over-enthusiastic.
I could. I’m still, with a focus always on the story, contemplating the rewards and pitfalls.
I did love the rewards.