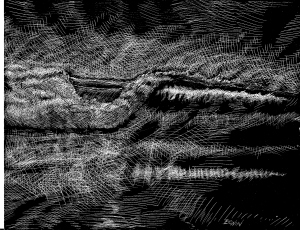 This was before our first child was born. We had finally achieved my longtime goal of living in Encinitas. We had arrived by way of our first and second apartments in Pacific Beach, P.B.: then a condo in University City; sold for a profit of $1,500.00 and a used VW; and now a two bedroom tract home east of I-5.

And, though I wasn’t supposed to be able to, I did park on the beach, with immediate access to Lowers; an hour and a half a day on a half hour lunch break. Sometimes, after work, I’d get in an afternoon session, maybe at Church when the northwest winds blew.

Those ten months that job lasted were, this far removed, dreamlike, surf-wise; and sort of made up for rarely getting to surf Swamis. Still, Trish and I could go to the La Paloma, she could shop at local boutiques- we were, despite living east of I-5,  locals. For a former inland cowboy, this was great.

Several times a week Trish and I would meet up after work, get some takeout food, go to the parking lot at Swamis to check the surf and the sunset. Even if the surf was marginal, there were always people hanging out; tourists, surfers, posers; something else to watch while eating.

On one such evening, a tall, thin, and already-wasted guy in Hollywood surf attire was chatting to people near the railing, leaning into car windows, talking surf stories. “Oh, and then there was the classic swell of December, 1969.”

At this time, with the second set of formal stairs in use, the cooler thing to do after surfing was to scale the bluff. I did it a few times. Sure, you’d be arrested or stoned (more like lectured) by a mob in the parking lot if you even tried it nowadays. Someone would surely sacrifice an environmentally friendly and reusable smoothy container to knock you back down.

On this evening, in the grainy light of dusk, Trish and I partway through some Mexican food, and directly in front of our partially-steamed windshield, two surfers popped up from the cliff and into sight.

John Amsterdam, wetsuit peeled down, was one of them. I can’t say for certain that he recognized me, but I’ll always swear he gave me the harshest look.

This was the last time, to my knowledge, that I saw Mr. Amsterdam.

I always feel that, maybe some day out at some semi-secret spot on the Straits of Juan de Fuca, I’ll see him again. Judging me; harshly; maybe almost as harshly as I judge myself.

John Amsterdam may always hate me.