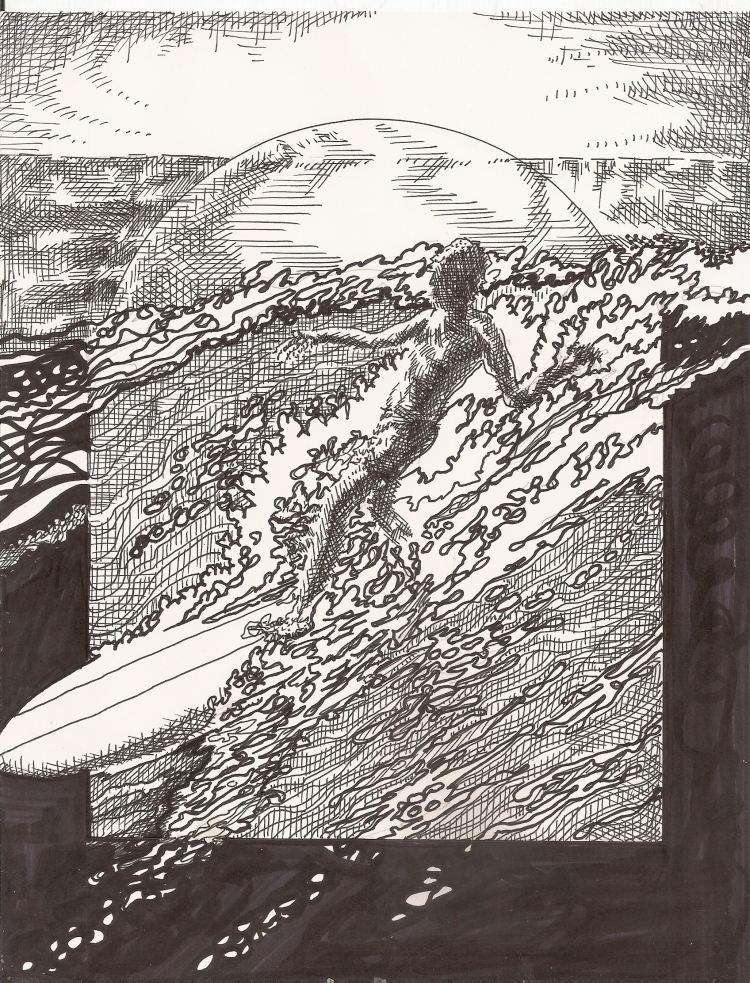 “Then take me disappearin’ through the smoke rings of my mind;
Down the foggy ruins of time; Far past the frozen leaves,
The haunted, frightened trees, Out to the windy beach,
Far from the twisted reach… of crazy sorrow.
Yes, to dance beneath the diamond sky with one hand waving free;
Silhouetted by the sea, Circled by the circus sands,
With all memory and fate, Driven deep beneath the waves;
Let me forget about today… until tomorrow.”
Bob Dylan
This drawing was taken from one of a series of photos taken by Harold Gee in 1965 at Pacific Beach Point. At about the same time, Dylan’s song, “Mr. Tambourine Man,” had already been covered by popular performers of the time.
The thing is, both artists are still going.
Here’s the story: I wanted to do something more on Skip Frye, someone I mentioned in another piece from my days in Pacific Beach. I started writing it, and, at the same time…
Somehow illustrations have become a bigger part of my site than I originally planned. This is fine, even great with me. Classic Ron Stoner photos of Skip at The Ranch are part of my image-centric memory. Maybe yours, too. I started drawing one… wasn’t happy with it; Skip in the slot, hands at his side, arching slightly. And the lighting was perfect.
And, at the same time, I wanted to say something about other local PB surfers from my years (1971-’74) there. I couldn’t think of this guy’s name.
Then I did. Dale Dobson. I googled the name, got a video of a longboarder at Swamis.
Wait, wasn’t Dobson a goofy-footer? I checked farther, found a photo of Dobson at Big Rock, 1965. Yeah; goofy-footer. Then, in this group of photos by Harold Gee, there was this shot of Skip Frye at… he might have called it PB Cove, which I’d have to guess is somewhere between the Point and Tourmaline Canyon.
And the photo looked so familiar. It may have been used in Gordon and Smith Surfboard ads from the time.
Anyway, this is the black and white version. I just purchased some watercolor pencils, and, now that this version is on the computer, watch out!
Meanwhile, if Dylan or Gee, or even Skip Frye, have a problem with me using images or words… maybe their people can contact… wait, I have no people.
So, hey, check back later. Thanks for dropping in. realsurfers is not intended to be a secret spot.
To quote Dylan, again, “No, I’m not reclusive; I’m exclusive.”
NOTE: I tried to scan the drawing in black and white; didn’t work. The black would have been… sorry you can see a drawing is really just a bunch of lines.

One thought on “Skip Frye slides from there to here”