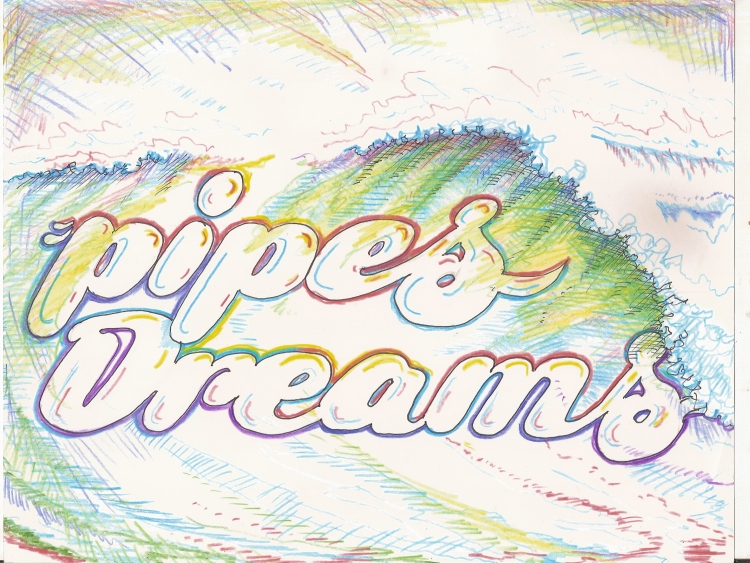 My family, usually with my friend Phillip Harper along, explored several surf spots other than Tamarack in my first years of surfing (1965- ?). I paddled, head-down, ruining unknown numbers of rides for real surfers at Swamis, quickly discerned Moonlight Beach was really not a surfing beach, decided Oceanside Pier was just too rough, and had too many Marines, many new to ocean swimming, getting in the way. Or I was actually afraid I’d get in their way.
Several times we moved on down 101, past Swamis, to where the future San Elijo State Park was under construction. Pipes was named for the then-new (now considerably shorter, rusted) drainage pipes hanging out of the side of the cliff. There were several sets of stairs, and we seemed to start at about the middle of the stretch that ends, to the south, at Cardiff Reef. It all seemed about the same, wave-wise, to me, at that time.
What I do remember is how clear the water seemed to be, protected by offshore kelp, onshore winds reduced by the cliffs, and with a mostly stable rock-infused bottom contour. I swear that, wading out, floating my board beside me, I was once hit by a wave that was just so thin and transparent that…
No, okay; you don’t have to believe me.
So, here’s another memory: My mom built a fire on the beach, sort of standard surf stuff, from the plentiful supply of driftwood. Out in the water; Phillip points to the uniformed ranger sort of marching down the beach.
So, you have the image of the Smokey Bear-hat wearing ranger; add in the sort-of-chunky mother of seven, undoubtedly wearing a dress, and there’s the face-to-face, then the Ranger kicking sand on the fire meant to warm her children… and my mom’s back in his face;  and we’re imagining that she’s saying “The park’s not even open yet,” and “this is what we’ve always done,” and the Ranger’s threatening some sort of action, and…
…And he left, eventually; and my mom restarted the fire, we got warm, and she didn’t bring us back there.
But I did go back. I went back after the park opened, but day-surfers had to rotate onto a small ledge and sneak around the fence to get to the most consistent peak, Pipes Proper, or to what my high school surfing friends and I referred to as Swamis beachbreak.

When Trish and I lived in Encinitas in the mid-70s, Pipes was the main place I surfed in the area, always with an eye toward Swamis; occasionally braving the crowd there.
For the past twelve years or so, Pipes Proper has been the designated ‘home break’ for my friend Ray Hicks. He parks on the highway, passing the crew of surfers, most around our age, who, possibly retired (Ray’s still working), have purchased the yearly park pass, and watch the surf from the parking lot inside the fence, at the bluff.  Ray, already in trunks or wetsuit, cruises down the ramp/access, drops off his sandals at the rip-rack rocks, paddles out, usually to the main peak.

It all seems kind of casual to me, sort of friendly.  Sure, Ray has had two pairs of sandals stolen, replaced with cheaper models, and now he just wears the cheaper models himself; and, yes, it does get crowded when it’s good, even when it’s not, but once in a while Ray writes me about memorable rides and memorable sessions, the water so clean, the waves so thin and transparent that…