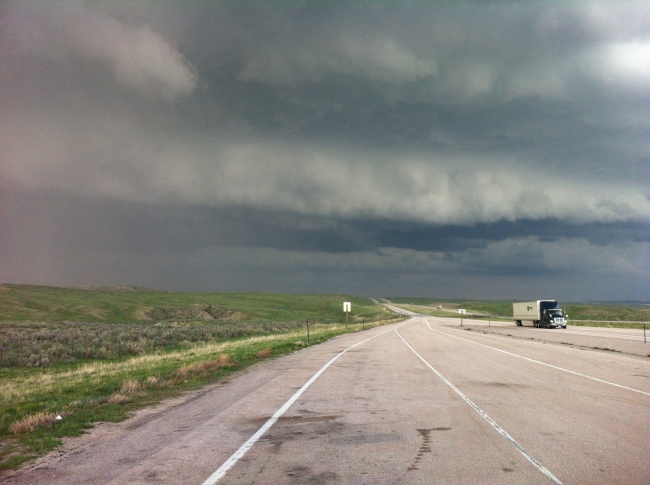 This is a photo Stephen Davis sent me from his trip from Port Townsend, Washington to Dayton, Ohio to bury his mother’s ashes. Stephen, it seems to me, has thrown himself off another ledge. The perfect guy to go surfing with, generous, willing to celebrate someone else’s ride, he has no real agenda.

“My Psychic told me I have to go.”

This seems like classic Stephen Davis. Though I’ve lived my life close to the edge; I always looked for certainty; jobs in the future, hopefully lined up; this one, then that one. Lined up toward some distant channel. If a section falls prematurely, I push through.

But Steve… different. He (forgive any forced metaphors), just pulled through, out; hit another wave. He seems, to me, to be like some incarnation of Candide; not quite clueless, but, maybe, optimistic.

Oh, I know that’s not totally true. He has demons; a father who was (and is) forever disapproving. “You have to get over that,” I told him en route from Fat Smitty’s, along Surf Route 101 in Discovery Bay, to some waves on the farther Straits. But, somewhere approaching Sequim on the way home, I was pounding the dashboard with my free hand, yelling, along with Stephen, “You (meaning Stephen’s Dad) ______ (I’m going to say ‘had sex with’ because my family members might be shocked at what I/we were really saying) Lenny’s (made up name of one of Stephen’s ice hockey teammates at, probably, the pre-high school level) mom!” Now, put it together with both of us pounding and laughing.

I don’t know if my weak on-the-road counseling was helpful for Stephen. He’s had plenty of counseling, even pre-Psychic. I did once receive a text from a surf spot in Oregon. He had, he wrote, sitting outside on a day in which the surf came up enough to wash the other surfers to the beach, heard the Universe ring. Clearly.

But that’s not the beginning of this story; it’s not even the middle. There’s more.