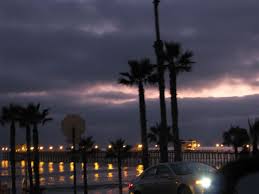 I’m working on a story from my high school era (also working on dividing my long surfing career into segments), after friends got licenses and cars, days when we’d speed to the beach after school. And, surf-whore that I was, I’d ride with pretty much anyone who would drive. When I had access to a car, I’d probably (likely) ask for some gas money.
In this story, probably in the spring of 1967, Melvin Glouser was the driver, Phillip Harper and I the passengers. The surf was small and extremely glassy. We’d parked in the free (then) lot by the first street south of the pier that went down to the beach.  There were rumblings in the sky and lightning in the distance, possibly moving closer.

“If lightning strikes whatever is highest in the vicinity, and, other than the pier, that would be us,” I postulated… A couple more rides and we got out.
En route home, Melvin, who I frequently accused of having “Farmers’ Toes” because of stubborn follicles, particularly around his big and next digits, nevertheless treated Phillip and me to ice cream at 31 Flavors ( I mean Baskin/Robbins). Phillip and I each got two scoops, but Melvin, since he was buying, got a three-scooper.
It was raining and completely dark as we headed back to Melvin’s parent’s car. Maybe lightning struck nearby, maybe he slipped; whichever, all three scoops dropped to the wet pavement. We all just looked at them for a minute.
Then, no doubt, Phillip and I looked at our own scoops, probably took a big bite; one of us calling “Shotgun” before the other. Or Phillip just got in the front seat. Or we finished our ice cream cones, Melvin his cone, just to keep the car a bit neater.
Like I said, I’m working on it.
Or maybe, if I get time to do a drawing… three scoops falling, dramatically lit by the lightning, just a hint of some hairy toes on the black asphalt… and I do have at least a couple more stories involving Melvin. Later.