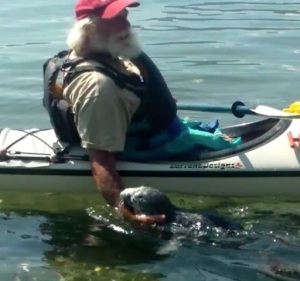 I tried to insert a video of my friend, Archie Endo, surfing, quite Archie-like (stylish long and gliding ride on a longboard), in Thailand. He is (still) there, middleman for a fish company.
As I said, tried. Wrong format, evidently, and I got a big old “X,” and a scolding.
So, here is a photo I could insert, another (obviously old) friend, Bill Thomas, kayaking below his house on the Hood Canal with his new friend.
I went surfing with Bill, who will proudly tell you he has surfed the Puget Sound on one of those storm days (like yesterday) where the entire fetch of the Sound (lots of miles) was headed north, and he was on some of those windswells.
That was then, years ago, and when we went to Westport on a typical, chopped-up day, Bill in a thick wetsuit more suited to diving, and I didn’t surf very well, but did make it out a couple of times, Bill was almost angry that his skills from thirty, forty years ago hadn’t stayed with him.
He took a couple of photos of another surfer, doing well, and drove back.
Despite Bill being a retired firefighter, he was not, evidently, the guy driving the rigs to urgent fires and aid calls. He was stridently unapologetic about that. “I just thought I’d do better,” he said. “And frankly, I thought you’d do better.”
I have seen Bill since, kayaking at (I’m just going to name the spot) Salt Creek. No, one up on the Straits. He did fine. No, I don’t have a photo.

One thought on “Former Edmonds, Washington (really) Surfer Bill Thomas (and a mention of Archie Endo in Thailand)”