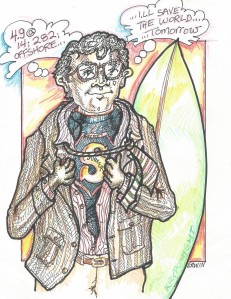 Maybe I had to draw this because I watched “The Secret Life of Walter Mitty” the other evening. I have long been aware of the James Thurber short story with the perpetually daydreaming character; actually having been called out and compared to Walter (and even this was years ago) for having an imaginary life that far exceeded the accomplishments I’d achieved in my real life. Maybe it’s because we all have a running narrative that deletes the mundane and monotonous; maybe surfers imagine our surfing life as something more than the net (subtracting flubs and falls from awesome tubes and turns) of our actual wave statistics; maybe it’s because we think being a real surfer means something more, that we have a relationship outside of any others; secret, even magical.

Though I don’t like all of my drawings, I did, even before it was finished (if any ever are), like this one. Trish said, “It’s okay. He looks kind of dweebie.” Oh, yeah; that’s right. He does. That doesn’t explain that secret bit of self confidence that allows him to chop-hop over the mundane and monotonous, a surf tune playing in his head. Fourteen second intervals.