My boss, Buddy Rollins [real name Lacy, which partially explains why he went to prison in Florida, where he learned sign lettering], of Buddy’s Sign Service, sold Christmas trees for several years at an otherwise empty lot next to Master’s Automotive, right on Oceanside Boulevard (U.S. Highway 101) in Oceanside, California.

Master’s Automotive, or, as we, in my family, referred to it, Mac’s Garage. Mac’s was where my father worked all day on Sundays, and Tuesday and Thursday evenings after his regular job on Camp Pendleton. It’s not like my dad and I hung out during the two seasons I untied bundles of trees, cut a little off the bottom, set them up on wooden supports, sold trees, and tied trees onto cars. We were busy.

I enjoyed the selling of the trees the most. I had received some experience helping out at the lot set up by my Boy Scout Troop (724, Fallbrook, California). At that time, I thought the whole place was like a clean, moveable, and fake almost-Disney Christmas woods, conveniently set up on blacktop. I could easily imagine background music from the March of the Tin Soldiers. I could fully visualize the cute girls who occasionally came in frolicking with me in the big military-issue (originally) tent; the little post-Mouseketeer, pre-Beach Party Annette Funicellos all giggly and…

Hey, I was, like, eleven to, maybe 13. So, not much actual frolicking. Mind frolicking.

But now, on Buddy’s lot, I was eighteen [the first year], then nineteen. I had a girlfriend, Trish, a real surfer girl- blond hair, not afraid of waves, not irritated by the sand as Annette had been rumored to have been.

And, in 1970, my second season on Buddy’s lot, Trish [who had her own job] worked a few shifts with me. That is, she sold lots [lots] of trees, and kept me busy loading and tying-on, while not merely holding several for her customers to decide between. “What do you think?” they’d ask. They’d ask her.

“Um, Erwin; could you load this please?” Sure.

So it was that I didn’t sell but did get to carry a tree to Joyce Hoffman’s VW bus, two surfboards on top. This was JOYCE HOFFMAN, the famous surfer, world champion, everything champion, the first woman to surf [I read this- didn’t see footage] the Banzai Pipeline, the only surfer to be named “Person of the Year” by the Los Angeles Times, the first woman to (later) be be inducted into the Surfer’s Hall of Fame.[‘On her way home from surfing Trestles, Rincon, some other mythological spot, she had stopped in here!’ You should read the previous line like the voice-over from “A Christmas Story”]

Blonde, fit, Joyce Hoffman had competed in a male-dominated sport and conquered. “Hey,” I wanted to say, “I surf. I have a VW bus. I, I surf, too.”  I didn’t. I did say something like, “Joyce Hoffman,” to which she responded with something like a polite, casual, “Uh huh.”

It seemed just knowing who she was would have been enough to prove I was a surfer. A real surfer, dammit.

Then she opened the side door. There, on the bed, was a bra. Nothing else. [nothing else I instantly focused on]  “Um.” I turned around quickly, politely, adjusting the tree a bit. When I turned back, the bra was gone. Joyce looked only slightly less casual, arms kind of crossed. 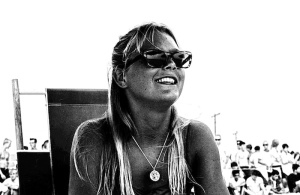 NEAR MISS. In 1976, living in Encinitas, I was painting most weekends for Two-Coat Charlie Barnett. I had actually gone back to work for the Navy Public Works in San Diego. Charlie wanted me to call in sick a couple of days to help out him and his brother, Olie, on a job in Leucadia, near Moonlight Beach. An added incentive was that the job was for a famous woman surfer, Joyce, and her husband.

I really couldn’t, and I didn’t. It turned out that the job involved bleaching and stripping real wood paneling, and somewhere in the process, Olie, who regularly sprayed lacquer without a respirator, got ill enough to have to be rushed to the hospital, and then stayed there a couple of days. No smoking, either.

Well. Missed opportunities. Had I worked the job at Joyce’s house, I could have said, waiting for the ambulance, probably in an only slightly chemically-altered state, “Hey, I once loaded a Christmas tree in your VW bus, and…” chuckle, chuckle, end of this imagined scenario.

Other than Joyce Hoffman might have said, giving me one more, slightly skeptical check-out, “Uh huh.”  If she’d kind of crossed her arms, I’d have known she remembered.

[Merry Whatever-you-celebrate-during-this-season to all the real surfers; to all the former surfers who remember there was, on rare occasions, something magical about surfing; to all the kooks and posers and after-work-and-weekenders; to all the girls who couldn’t just sit on the beach and watch; to all the young frothers, and to all those who merely simmer. If I can’t be surfing, I do feel thankful that I sometimes have a few moments to write about it (Not that I wouldn’t rather be pulling up high and tight on a runner)]