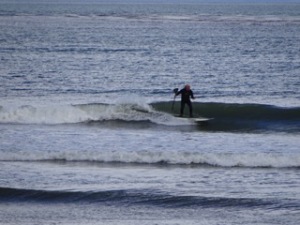 Jeff Vaughn, who ripped up a large number of lefts while I was searching for a right that would clear the reef, casually doing the classic South Bay longboard drop-stand-and-turn, noseride, kickout or island pullout or flip backwards in a closeout, sent me a few shots from an uncrowded session at a sort-of-secret spot (as in, everyone knows about it, but no one is supposed to give the name out to any kooks who evidently don’t own a computer or know anyone who does, and who might show up on one of those rare, rare, extremely rare days when there are actually waves) somewhere on the Straits of Juan de Fuca.

I showed my wife, Trish, the ones of me, obviously trimming, quite casually, and in the right spot on the wave. The images were quite small and her comments included: “You weren’t wearing a hood (the other surfer out, a PA local and member of the Surfrider Foundation, whose name I should know, but don’t, was);” and, “At least you’re standing up;” and, “That stick (‘you mean paddle?’), it looks like, maybe, you use it to help you stand up;” and, in response to a question from me, “No, you don’t look that fat.” More like “THAT fat.”

I wrote back to Jeff, thanked him, sent the photos on to a few of my surfing friends. Well, pretty much all of them I have email addresses for, mostly so I didn’t have to describe the waves as “knee to waist high with the occasional head high sets, and the indicators, at the lefts and the rights, going off pretty regularly.”

Wow, the last paragraph pretty much messed up the timing for this: Jeff sent more photos, bigger, zoomed-in. In these photos, I do look THAT fat. No, you won’t be seeing them, but, when I showed Trish, complained about how I look less like the surfing super hero I know she thinks of me as, than an old fat guy in an embarrassingly stretched-to-the-limit wetsuit (but still in perfect trim), she merely nodded. Politely. “And yet,” when I tried to show her the same photo again, just to show the wave positioning, she said, “and yet you can’t stop looking at it.”

No. In fact, maybe I’ll print it up, stick that on the refrigerator.

One thought on “It’s Like Mr. Peanut Without the Hat”