Here’s the new drawing for the header. It was inspired by another awesome photograph I received from Stephen Davis; yeah, the lover of all things water, who, incidentally, is headed back to the Northwest after a long stretch and many adventures south of the wall. I’m sort of anticipating some stories (having had a brief preview on the phone yesterday, Steve in San Diego, me hoping the weather would stay warm enough to paint a bit longer; Steve evidently unable to hear me, answering questions he thought I might be asking. “Yeah, it’s a drainer, you have to dodge rocks; there’s sea urchins; surfers have had brain damage.” “Wha??”

The drawing, which I had reduced at The Printery, evidently not enough to get the whole thing on the header, partially because the line version doesn’t show up well. Here, then, is the full width version:

Okay, here’s my other recent surf drawing (I do sometimes draw non-surf stuff). I’m considering redrawing it. I’m pretty happy except (and this has happened before) I’m not so stoked on the surfer’s overall look. Maybe, then…

Maybe I’m getting a bit ahead of myself here; probably should stretch these out. Crappy weather has given me more of an opportunity to draw, something I won’t have once painting season gets here. Here: 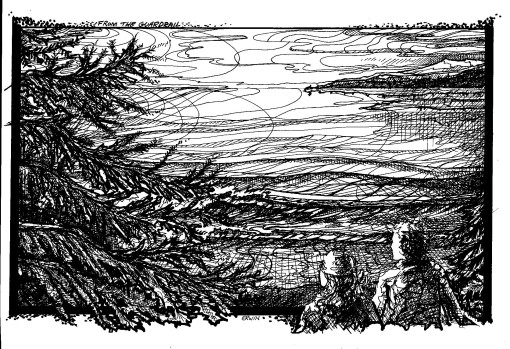 So, okay; I see a few too many scanner marks. Errrr. My scanner/computer connection is quite aggravating. Won’t line up straight. About a third of the scans fail and have to be redone; I’m getting so many scans on my computer I have to scroll down for each new entry. Probably stuff computer literate people have figured out. This is sort of a random mosaic pattern created by my page dealeobopper. I’ll go back and post larger versions.

Yeah, the surfer in the color version is actually too green in real life also.