…somewhere. Usually somewhere else. I’m, luckily, pretty busy painting, today being the only day lately where rain isn’t threatening or falling. Since there are no swell forecasts that predict anything close, and I don’t have time to go to the coast, I googled/yahooed ‘no surf,’ got this image.

The cove is, evidently, now called ‘No Surf Beach,’ along Sunset Cliffs. I actually have a couple of stories about the spot. The first involves Stephen Penn and I, both twenty years old, freshly married and living in San Diego. Steve, formerly of Marin County, and his wife, formerly Dru Urner, formerly of Fallbrook, were living in Ocean Beach; Trish and I in Pacific Beach. Our daughter, Drucilla (born on earth day, April 22, 1980, before it was Earth Day- and, oddly enough, as I edit this, it’s again Earth Day- Happy Birthday), is actually named after Dru, a promise Trish made to Drucilla Urner, evidently in typing class back in high school.

It was 1972, and Steve and I went looking for waves. I had surfed Sunset Cliffs before, but at Luscombs, the point in the distance, and once at New Break (with Bucky Davis and Phillip Harper, walking in back in 1967- we had no problems with locals). When Steve and I arrived at the little parking area in the foreground, there were four or five surfers at the little peak. The tide was lower and the peak was closer to the foreground point. I thought these other surfers were less a problem than Steve did. “They’ll leave,” I said. “Just start catching waves.”

Now, I don’t want to sound all aggro about this, though I may have been a little more exuberant while trying to convince Stephen to go out. It was either here or Ocean Beach jetty. Surfing mostly Crystal Pier, mostly after work and on weekends, with strangers, since Trish and I got married in November 1971 had pushed me toward a sort of ghetto mentality. It wasn’t surfing Swamis beachbreak with friends. This was city surfing. No eye contact.

Yeah, still dealing with my wave lust, bad manners. I wasn’t, I insist, pushy, merely persistent, going for position when possible, always ready for waves someone missed or fell on.

Three hours or so later, with three or four different surfers sharing the lineup, with the tide filling in and the waves ending on the mossy ledge beyond the pinnacle rock, Steve and I were climbing back up the cliff. With almost all of my surfing done between/before/after school/work/other-seemingly-or-actually important-stuff, forty-five minutes to an hour an a half, with me mentally breaking it into fifteen minute ‘heats,’ this was one of the longest sessions I had surfed. I was exhausted.

Maybe it was the competition. I couldn’t get out of the water before Steve; and the waves kept coming. I have more to say on the whole waves vs. life subject, but … Oh, gotta get to some actually important stuff. If I get some work done, and the waves… you know… I’ll be ready.

Later. WAIT! Since there’s no waves in the local forecast, and not mentioning how Adam Wipeout scored, Mike could have but didn’t, and that I ran into Darrin, who scored on the coast, at Wal-Mart, and because I’m planning on going down to my Dad’s house (now my brother’s house) in Chinook, Washington, here’s a shot I stole from a forecast site. 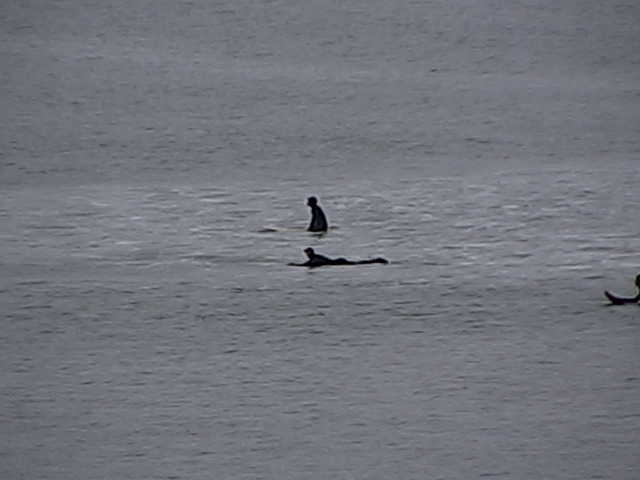