Somewhere between waking up a little later than I had planned, trying to get up the energy and necessary excitement level to drive to a job I have to (HAVE TO) get completed before Monday, that project twenty miles out on a (relatively) wilderness peninsula; somewhat after I stepped in cat barf (easily detected with bare feet), had to deal with the same cat’s (Snickerdoodle’s) latest incredibly, unbearably stinky crap (each installment demanding instant removal from the litter box and the house), made a pot of coffee for today’s thermos full, microwaved a cup of yesterday’s leftover, turned on the light in the art/breakfast nook, found the magazine and the photo I would use as reference, then…

…oh, yeah, then I decided, after getting fresh boxers and socks for today from the laundry room, that I could actually use the Seahawks shirt I had worn, yesterday, for Blue Friday, but hadn’t worn to paint in; fresh enough; so I set the magazine and (I think) my drawing/computer eyeglasses on top of the stuff on top of the heater near the door I went out to retrieve my shirt. This particular pair of cheaters is too strong for watching TV (or for walking around), but perfect for making a lot of lines make sense. Some sense.

I looked. Couldn’t find them. Got a flashlight, dug around under the piano and the heater, retraced my steps. Gave up. The clock is ticking. Got to get to work. 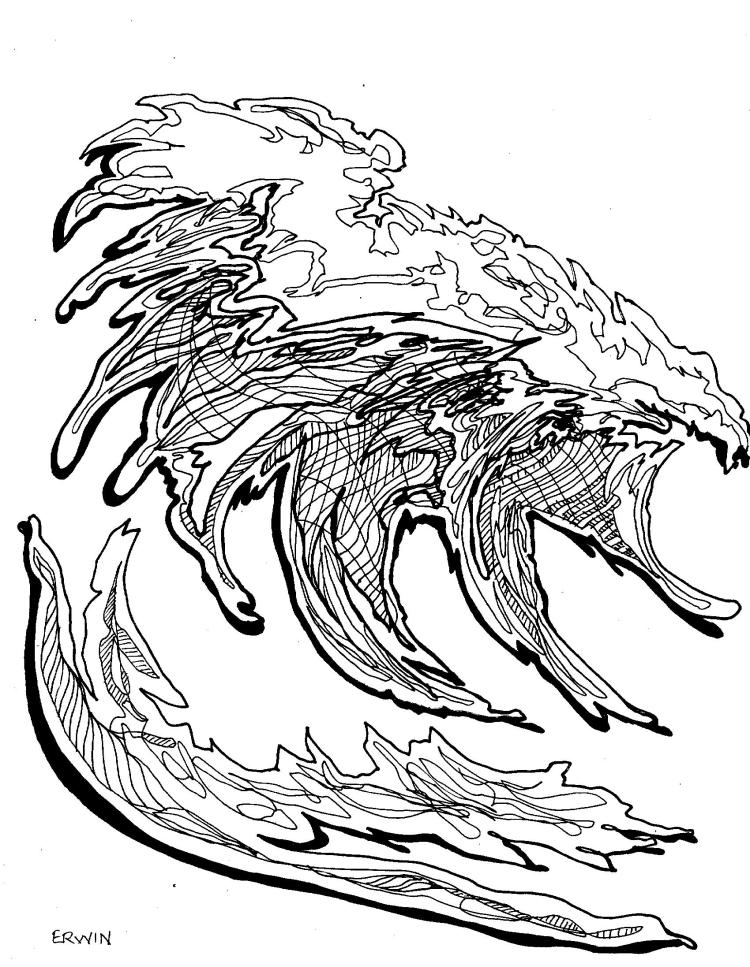 This is drawn with my painting (trim-cutting mostly) glasses, a few specks on the lenses. It’s not an excuse, it’s an explanation.

MEANWHILE, I got some new earplugs. I’ve been using these orange-ish waxy plugs purchased at Walmart, but, if I wipe out enough times, I always seem to lose one. Then I rip the other one in half. Then, as happened this week, I might lose one of those. If I don’t wear earplugs I will get one ear or the other plugged up. It’s not always immediate, but this last time I lost hearing in my right ear before I made it home. This deafness is quite irritating to people (Trish mostly) who think I should hear what they’re saying.

It’s also quite irritating to me, constantly trying to clear the ear, dealing with that drop of the ocean caught between the bone growth (diagnosed when I was 20 year old) that has been narrowing my ear canals, and my ear drum. Slosh, slosh, clearness, hey… replugged. Silence. “What?” I’m constantly snapping my fingers next to my ear, checking.

AFTER googling ‘surfers’ ear’, it seems like the best solution is surgery. Drilling or chisling. NOOOOOOooo! WELL, we ordered and received some new plugs, seemingly identical (except for the strap connecting the two) to the ones endorsed by Tom Carroll, but cheaper from Ebay, possibly because of the lack of his endorsement. I’ve checked them out, can’t wait to use them.

MY HOPE is I don’t find my drawing glasses the same way I found Snicky’s barf. Cruncccccccchhh.

ADDITIONALLY, because it seems to be a deal, with attacks from the tweeter-in-chief; it seems like everyone should take a note from the Seattle area high school football team that took a knee during the national anthem. This shows no disrespect, and, in fact, probably shows more respect for what our country stands for (I won’t add ‘allegedly’, ‘historically,’ or ‘supposedly’- for the sake of not arguing), while noting that social inequality is real. Really.