Okay, this isn’t me in this photo; it’s Deon Wilson at Dungeons, Cape Town, South Africa, courtesy (thank you) of “The Telegraph.” I’m sure he was trying his best to appear casual as he went down the line, all cool and ready to rip it up. 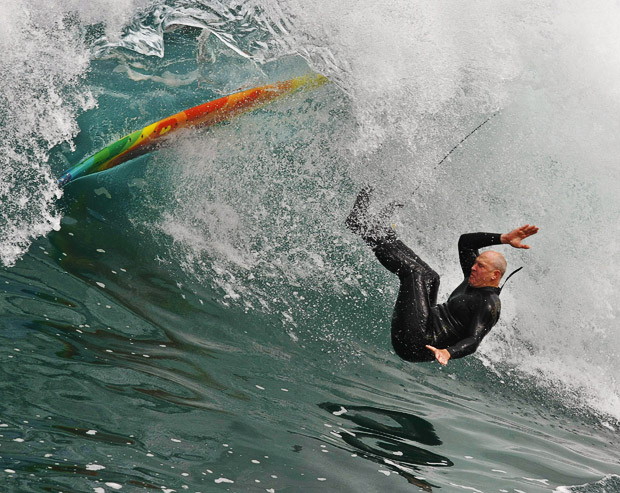 Something went wrong. If he’d just surfed, let’s say, ‘routinely,’ safely, ridden toward the shoulder, ahead of the curl, maybe making a few adjustments, swoops rather than carves, he probably would have made the wave. Oh, but no; Deon decided to throw it up toward the lip, no doubt thinking, “This’ll be exciting, this’ll be cool.”

Okay, I have a whole real life (as in ‘out of the water’) story to go with this possibly-overwrought, definitely-stretched metaphor; but I have to go to work to make up for the money I didn’t make this week, partially (and again) due to my just appearing to be too damn casual, doing it (after almost 49 years) my way.

Later. Oh, and just like Deon, I’ll remember the wipeout longer than I’d remember a nice, safe, routine ride.  And, though I’m perfectly capable of uncontrolled enthusiasm, I do plan on, mostly, staying casual.

Casualness is a form of rebellion. Okay, I’ll be rethinking this a bit before I add to this post.