When we hang out with other surfers, we kind of brush up against their lives, their stories. We get a brief glimpse, a snapshot. 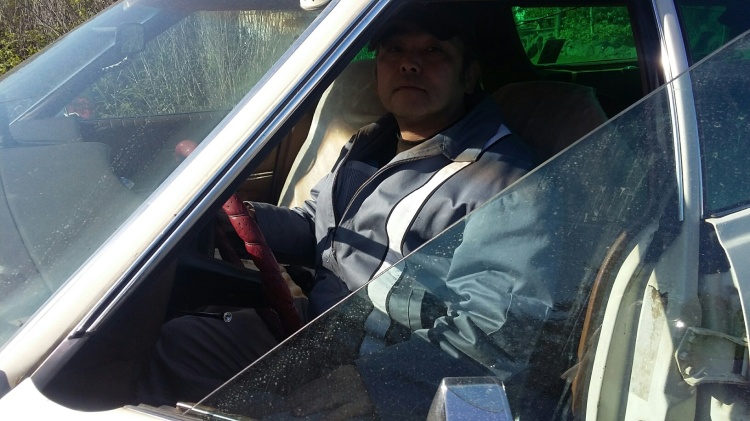 It’s not clear, and it’s nowhere near a complete picture of someone else’s life; and it’s not enough.

This piece is about a recent trip. Archie, still not recovered enough from the stroke he suffered over a year ago to surf, riding with me to check out one of his favorite surf spots. Finding actually ‘surfable’ (Archie’s term) on the Strait of Juan de Fuca was, as always, a gamble; and this run was scheduled less on surf forecast, and more on time left before Archie had to (today, in fact) return to his working life (middle man in the fishing industry) in Thailand.

That’s not enough information. Atsushi “Archie” Endo, duel citizen, learned to surf in Japan. Somewhat a radical, he was never interested in short boards. He surfed (and will again) with a throwback, 1960s glide; all about wave positioning edge control. I’ve never seen him even try to noseride.  He plays drums and (I’m going to say it) bitchin’ surf guitar, and has an incredible interest in music and language.

An expert in salmon (though now, I think, he’s mostly dealing in Tuna) Archie’s expertise has taken him to coastal locations all over the world. 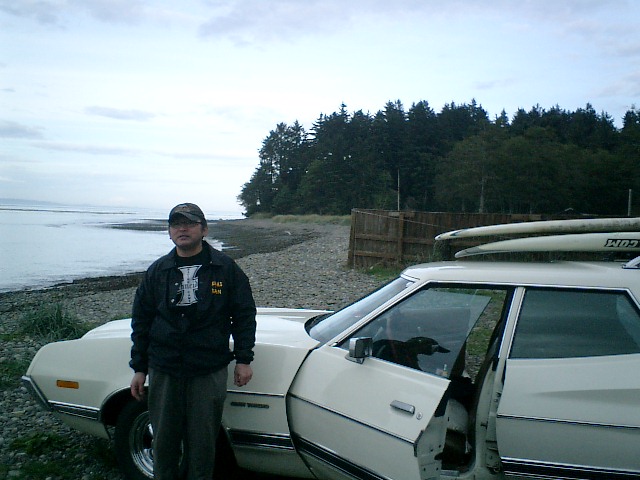 Archie is also known for his collection of retro vehicles. This photo was taken a few years ago. Note the lack of surf in the background. 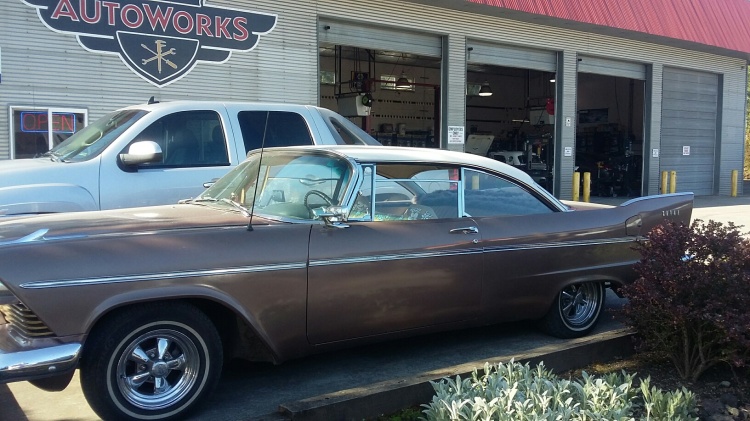 (above) One of Archie’s cars.

On this trip, the only one at this not-secret-spot was Big Dave. While waiting around for the tide to get a bit better (or the waves to get bigger, or something), I probably learned more about Big Dave than I knew from the run-ins with him over the past dozen years. 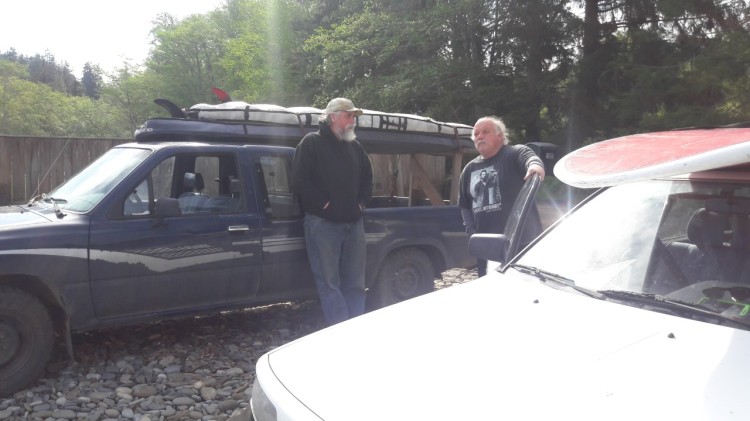 It’s Big Dave on the left, currently sporting a beard. Now, here’s our connection: When I moved to the Pacific Beach area of San Diego, 20 years old, 1971, Dave was, along with Joe Roper, one of those Crystal “Pier Rats” (his term), 15 years old. It’s not like we hung out; but we were, no doubt, in the water together numerous times.

Archie, at some later date, lived in San Diego; and, he says, one of his favorite surf spots, anywhere, was the P.B. Point, Tourmaline Canyon area. “I lived right up the bluff,” I said. “My parents lived on Thomas Street,” Big Dave said. “In the neighborhood.”

Now; what I learned. While I came to the northwest up I-5 in a U-Haul, Dave sailed here from Hawaii. Dave has stories of sneaking into Ralph’s, having a friend’s boat hit the rocks at Dolphin Tanks, other stories that make the best of mine seem pretty punky.

So; that’s the past. Nowadays Dave is noted for extra long sessions. While I had heard he spent eight hours straight in the water on a recent swell, he said, “It was more like ten. It was a ‘one more wave’ kind of thing.” 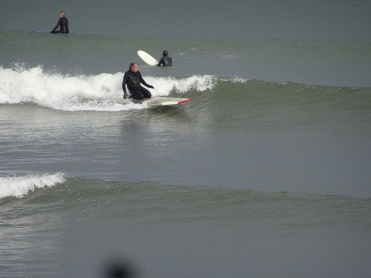 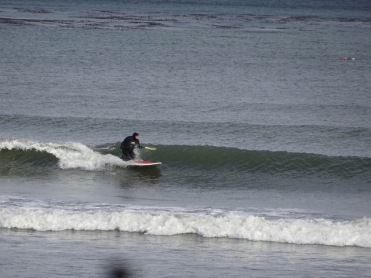 Dave, again, on the left. It’s not just like he sits there. Big Dave catches a lot of waves. 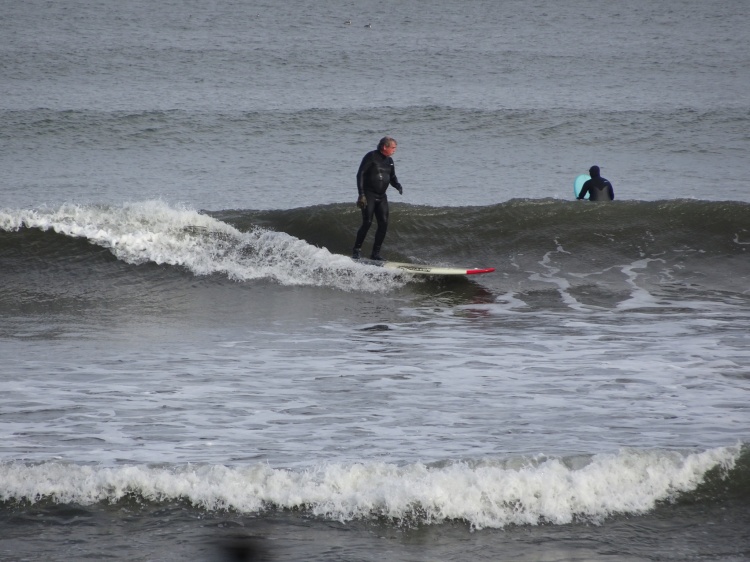 So, on this day, with Archie watching from the stadium chair Trish insisted I bring, Big Dave and I were trading off waves. When I said, because the waves were sectioning-off, I had to go down the line a bit rather than stay in the pocket, he asked, “What part of Seattle are you from again?”

When I insisted I was staying high on the waves in order to make the inside section, with the option of pulling out or doing a floater (as opposed to dropping low and ‘barrel dodging,’ an Adam Wipeout phrase), Dave gave me a bit of a tutorial on sideslipping. On my next wave, approaching the inside section, with him paddling out, I reached (as per instruction) for the outside rail. “Hey, what about the paddle?”  Then I went high on the wave, sideslipped back under the lip and onto the face. As per instruction.

It’s not like I haven’t done this before. That’s my defense.

I did take a break after three hours or so, with the excuse that it was rude to leave Archie alone on the beach for so long. Archie insisted he was enjoying it. So, back out for another two hours.

I’m pretty sure Dave got out before Archie and I left.  He probably went back out for ‘one more wave.’ Or so.

We do run into some colorful characters in life. I can keep up with Archie on Hotmail. Big Dave drives a dump truck for Jefferson County; I see him occasionally on the road. Here’s how close we are: When I asked him for his cell phone number, he said he could give me one digit each time we meet. Adam James thought this was the funniest thing. “You could probably guess the first number is a three; huh?”

3 thoughts on “Sideslipping With Archie Endo and Big Dave”