…and, as always, I’m just glad to get some waves. Swell windows along the Strait of Juan de Fuca are small, tight, and reliant on so many variables.  And I wouldn’t have even been checking them out or considering surfing on a weekend if I hadn’t had such an exhausting work week; work completed on a frustrating and not-really-all-that-profitable project at about 8pm on Friday, painting stuff piled back into the van, check ATM-deposited.

EDIT; [Hey, wait; was International Surfing Day June 16, or is it June 22nd? Kind of confusing. Doesn’t really matter; I surfed on one of the possibilities, not sure about next weekend; or any weekend, but, since this weekend is gone and the reports are in, it seems like those who really wanted northwest waves got some. So, good.]

It was a Hobuck weekend for sure. It was the kind of Olympic Peninsula weekend Seattle-Siders dream of. White Reggie Longstroke had taken off on Thursday night to secure a prime spot. Temperatures were predicted to be in the 80 degree range, no big disturbing winds, moderate swell.

I definitely had no plans to go to the coast, and was trying to get all the parties together to start another job, miss the mob. I was hoping for a small swell window, like, checking, like today, right now. It’s a maybe, but… yeah, someone might be getting some waves.

Big Dave, who I’d run into on Wednesday or so, me on my way to a job, he standing by his Jefferson County dump truck, waiting, evidently, to fill in some pot holes on the Center Road, and who I really just wanted to clue in on a session I’d had (and he’d missed) with Clint and I pretty much the only surfers out; but he had to tell me the coast looked to be the bet for the weekend, and, man, I really missed the Memorial Day surf at La Push.

“Wait,” I said; I was checking out the camera, swear I caught an image of you bottom-turning on a wave.” “Probably. I was out there.”

I must add that I also got a clue, texted from an unnamed surf zealot down the canal, that there might be a little window that might not show on the forecast, even on the buoys.

No response to my “Going for it” text at 4:30. Knowing he had graduation parties to go to, probably from Shelton to Chimacum, I just knew he was already on it in the pre-dawn light. 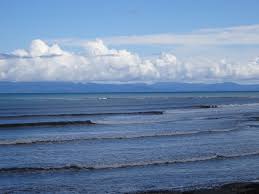 Okay, this isn’t actually the lineup when I arrived at around 6;45. I did take some photos with my phone, but can’t figure out how to send them to my e-mail. It was similar, but cleaner; the tide already low and headed for the lowest low (I’m told) of the year; and the swell was dropping, had dropped overnight, one surfer was out, one was headed out, two more were suiting up, and, well, I had to get out there.

Adam Wipeout wasn’t already there, but, with all I didn’t know, he might have been somewhere, hitting waves bigger and better.

It was pretty much over two hours later when I slogged through the mid-cove quicksand. Window closed.  On the way home I did pass a lot of surfers, even more kayakers, as many rigs trailering boats.  Hopefully each of those folks found something to enjoy.  With a rising tide, there could have been another window. And there’s always the coast. Hobuck, La Push, various spots in between… maybe.

Geez, it’s already late; got to get to work.