…just to not be unfriendly (yeah, it’s almost a double negative- evidently now acceptable), I said something (probably a “How’s it going?”) to the woman on duty, her job to wanders around the gas pumps, answering questions like, “Prices going up or down?”, “Which way do I slide my card?”, and “Nice day, isn’t it?”

“Fine,” she answered. I would say she was an older woman, but, increasingly, ‘older’ can still be younger than I am. She checked out the 10’6″ Hobie Standup strapped on my Toyota wagon. “How’s your day going?”

I was, of course, though my small and half-full (not half-empty) tank would be filled rather quickly; and because there was no one waiting impatiently behind me; ready to tell her more than she wanted to know about how my day was going.

Okay, so this isn’t a photo of her; it is from Costco, and I do like the samples. It’s kind of a tradition of mine, stopping at Costco on the way home; kind of like lowering the cost of the surf/shopping trip. AND, when I’d go surfing with my friend Archie Endo, we’d hit the samples almost as hard as the locals, swarming and swooping, elbows and walking sticks flailing, rather like a crowded lineup. 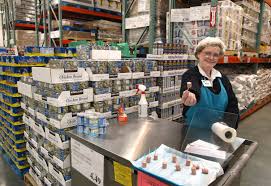 So, instead of the hairnet, the attendant was wearing a boonie hat, last year’s model, and while I was blathering about how, yeah, I’d always surfed, learned in California, and, on this day, someone had said that my riding a bigger board was cheating, and I’d said, “Well, they’re available for purchase,” and I, at least thought- did say later, to several people, “There’s catching waves, and there’s riding waves;” it came out that she had lived all around Orange County, including Dana Point, home of Hobie,  and had graduated from high school in Mission Viejo in 1973 (yeah, younger).

“Whoa,” I, undoubtedly said, “When I was a kid in the North (San Diego) County, there was nothing there.” Evidently, while Fallbrook Union High School had been around for years, her high school started in 1966.

“I was always around surfing,” she said, “but never took it up. It’s great that you’re still doing it.”

Now it was time to move. Someone was behind me, the tank was two clicks over full, I had done the math (32mpg- great, though it varies).

She had time to tell me that she had once driven a bus with a rider who surfed named Dino Andino. “And his son is…” “Yeah, Kalohe.”

“You know,” she said as I pulled away (and I might be forgiven if I took her look to mean ‘fuck ’em’), “keep on surfing.”