…there are many sites to see (I feel as if I should do some rhyming here),

On the south side of Mount Walker, there’s this place owned by a Hippieeee;

Name’s Hippie Bob or Hippie Mike, I just can’t quite recall (or retell) it;

But have to wonder about the panel wagon, and what tragedy befell it. 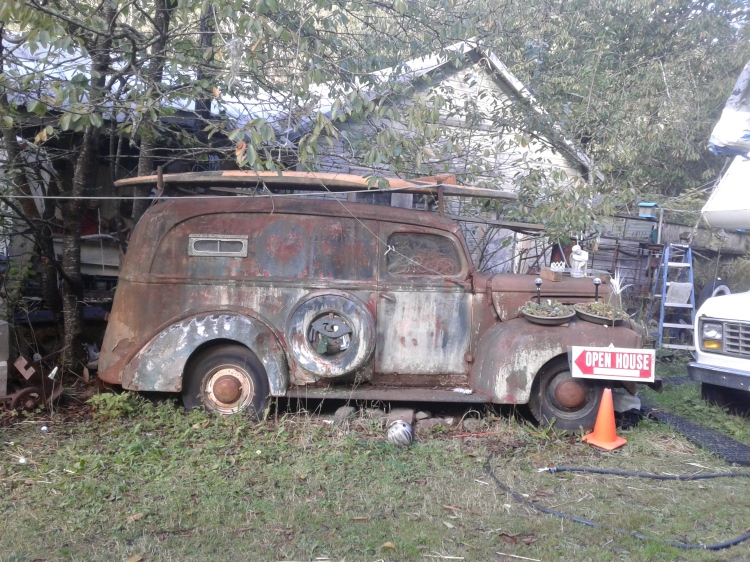 Adam Wipeout James told me I had to check out the board the next time I headed south. The wagon has been parked there, in this little clustered patch in the midst of the Olympic National Forest, for years. The board is a newer addition.

Hydrosexual Stephen Davis was riding with me when we pulled over. “I think that board was made by John Edwards,” Steve said. “You know John Edwards?”

“Yeah; up in Port Townsend. Of course. I once saw John, and I think it might be Jonathan Edwards,” I said, “try to surf in a gale on the windward side of the Quimper Peninsula (I wouldn’t have identified the location in this way to Steve, it’s for the reader’s benefit).  Ridiculous, I thought, and unsuccessful- more so when (the same) Adam Wipeout convinced me, or we convinced each other, to try a similar feat- also unsuccessful; though, while Adam caught at least one wave, I went over the falls sideways onto the rocks adjacent to (I may have said ‘next to’) the boat ramp. First big ding in my first SUP.”

“We could find out all this, for sure. Just go to the door.”

Not immediately able to tell which door was the proper entrance, and a bit intimidated (or just polite, or, maybe, in a hurry), the mystery will remain.

So… we loaded up and headed down, along Hood Canal, past forest and towns; with the water sparkling in the September sun; down on Surf Route one OH one.