In a CONVERSATION with my friend, media darling (I will continue to call him this- it’s true) ADAM WIPEOUT JAMES, me painting trim in a low-bank waterfront mansion (part of the greater Puget Sound, but many thousands of feet (because waterfront seems to be sold my the foot) from even the fickle, often-trickling (note the internal rhyme) waves of the Strait of Juan de Fuca; Adam just about to miss a ferry from Bainbridge Island to Seattle, where he would attend and cook oysters at an event held by ‘WARM CURRENTS,’ a group dedicated to getting kids who might not otherwise get the chance to enjoy the cold bliss of surfing, Adam, in response to my telling him that I was switching to surfing a TRADITIONAL LONGBOARD, and that he should definitely tell ‘Warm Currents’ official, ABIGAIL, who, if you read ‘Realsurfers’ religiously (as you should), you will recall that Abigail, who I, allegedly (accused, not convicted) once burned on a wave (in response to, again, allegedly, she pulled my leash), but who (still Abby/Abigail) did, nevertheless, purchase an ORIGINAL ERWIN t-shirt; and that this switch from the STANDUP PADDLEBOARD would, obviously and unavoidably make me far less DOMINATE in the lineup; in response to all that, Adam said, “WAIT! WAIT! you’re going to crawl on your belly, MAYBE jump up to your knees; maybe even (gulp) STAND UP?”

There was something in Adam’s TONE that just hit me wrong.  NO, not the tone, it was the WORDS.

“NO, man; I’m planning on RIPPING IT UP; dropping-in, back to the wall; swooping, climbing and dropping, tearing into a vicious cutback… all that.” 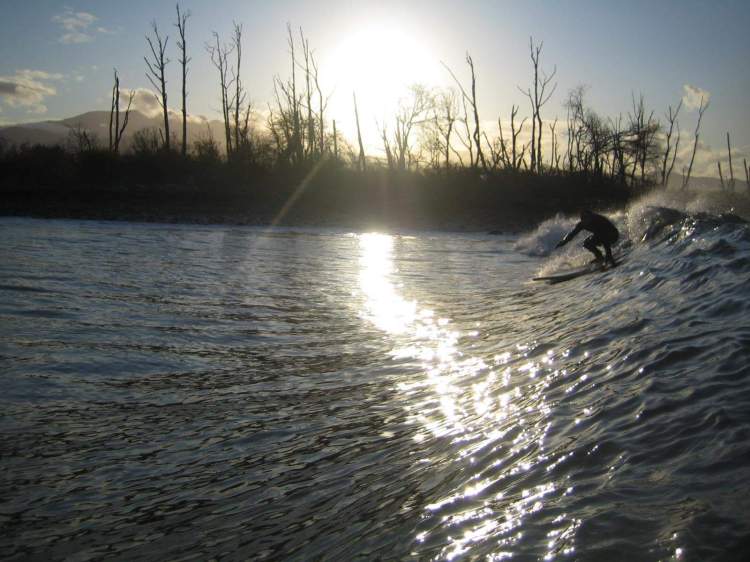 I would like to say the catalyst for my switch back to a longboard was that ‘Allboard’ (formerly ‘Shortboard’ to distinguish him from ‘Hippy’) Aaron’ said he has the perfect board for me, a ten-four Ricky Young; or that legendary longboard stylist Atsushi ‘Archie’ Endo offered me a ten-two Southcoast on a long-term loan basis- I would like to say that- but the truth is, if I want to surf some of the Strait’s less-accessible spots, or even, like, make the trek back from, say the beach at Westport to the parking lot, without, embarrassingly, dragging my board across the sand/gravel, and, sweating and red-faced, stopping every once in a while to readjust my grip on my SUP, I might just have to switch back to crawling onto my board, paddling for and into waves, hoping some dormant muscle memory might kick in and… we’ll see.

Archie Endo shot this one. It’s, like, waist-high, right?

ALSO, I switched the header back from the one drawn by my late sister, MELISSA, to one of me standing up on a surfboard.  Yes, I did make that wave.

YES, I am aware that I’ve been saying I have (already) given up my WAVE-HOGGING ways for a while.  Well.

3 thoughts on “WATCH OUT! Going Paddle-less”

Leave a Reply to Erwin A. Dence Jr. Cancel reply