I am planning on doing a series of animals that have a history and a spiritual connection to the Northwest.  Of course, I want to tie it in to the waters, the ocean that spreads its fingers into the land.

The illustration of the raven is the first of these.  I can’t seem to quit on any drawing until it’s pretty much over-done, can’t seem to keep it simple.  So, here’s the latest addition to the raven:

When I’m pretty happy with the progress of a particular drawing, it becomes a worry that anything additional I do may not improve, and might possibly ruin the whole thing. This is the case with the Coyote illustration.  I got the coyote done, maybe, and then worried about where to place it.  I added the butterfly, and then the lettering, and then got copies of that so that, if I ruin one, I can try again.

Here’s where we are: 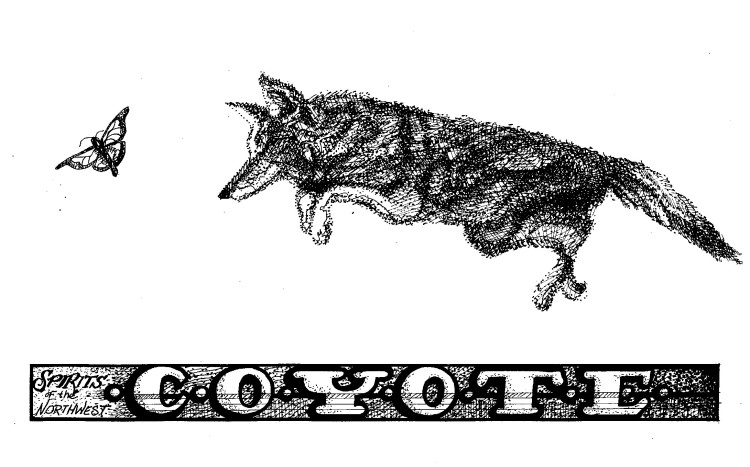 There’s one spot under the front feet that is on the original.  Any other random, out of place spots are from the scanner.  I didn’t want to white it out because there may be some added value in having the original.  For example, Trish wants the original of the raven drawing.  It may be too late.  I did the drawing, 11 by 17, got copies; colored in several, got copies and reductions; added the lettering to one of those.  There is, then, the original without the lettering, and the… yeah, confusing.

I am, however, bravely or foolishly, currently adding background to the original coyote drawing.  Water, waves, driftwood.  Sort of scary.

If we compare it to surfing, the best I can come up with is: If you get one of the best rides of a session, one you probably won’t top, do you come in?  What if the first wave, as is sometimes the case, is the best?

I sort of think there is.  YES, it does suggest one can have FRIENDS; which then suggests there might be some sort of community of surfers.  Community.  Hmmm.

I have phone numbers for, probably (only) six or seven surfers. I share info with three regularly, a couple more sometimes, and others rarely.  Mostly I get “You would have loved it” text messages, after the fact.  Sometimes there might be some “What do you think” strike/skunk probability discussions/planning sessions.

It kind of comes down to TRUST, and, YEAH, the fallback position is that there are NEVER waves around these parts, but there are ALWAYS waves in… oh; gotta go.

One thought on “Northwest Spirit Animals”