Here’s a photo of a spot you or I will, most likely, never surf, and a painting (in progress) of a spot that exists, possibly only, in the artist’s mind: 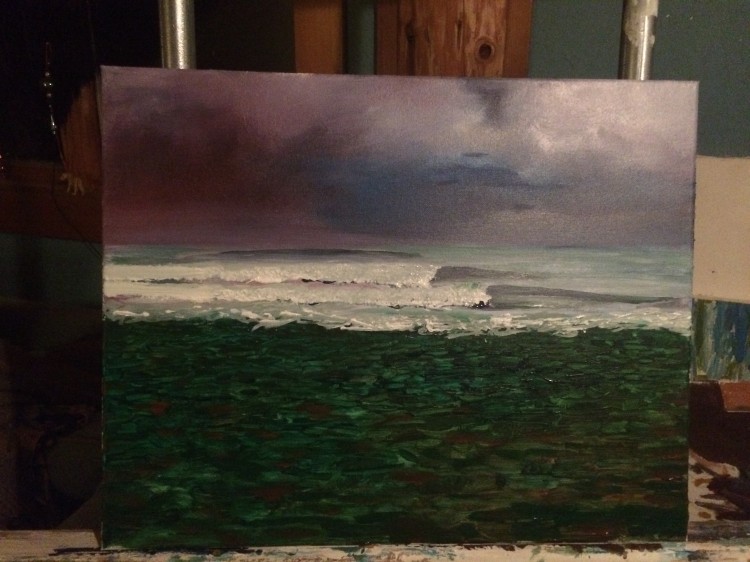 What they have in common is the atmosphere.  It can be bright and sunny on the Strait of Juan de Fuca, but the darkness, the variations in gray; shining silver to near-black; this is more common.  With the orientation, north shore, low sun over high mountains, it can seem like dawn in the daylight hours; 7:30 or so to 4:30, right about now; and almost a month until the solstice.

The painting is by Stephen Davis.  My critique, shared with him: Love the sky, love the waves; not sure about the green foreground.  Steve’s response: “I’ll be going back in; I’m trying different techniques; want to get the cobbles just right.”  Stay tuned.

Oh, and about the photograph. It’s not where I thought it was, and I had many more clues than I’m willing to share with you*.

Oh, oh; I am taking some advantage of the short days, working on my novel, “Swamis;” and, editing the shit out of what I’ve already written first, second, third drafts of, without getting to the exciting climax, the famous December ’69 swell, I have gotten to the point where I’m a bit afraid to share too much.  I am (possibly delusion-ally) envisioning it as a limited series.  Netflix, Prime; yeah, they could use a surf-centric/murder mystery/coming of age story/fake memoir with way too much dialogue (and not enough surfing for a real surfer) set in a world of hyper change: Home grown marijuana, revolution, war, love, and magic; North County, San Diego, 1969.

*If we talk in person, I do have some session stories I could tell.  (crowds, skunking’s, scores, entanglements, wind, rain… all the usual northwest stuff).   See you out on Surf Route 101.

WAIT, WAIT; I’m adding another painting; entirely because I made some reference to ‘the ninth wave’ in an email to Drew Kampion, and, well, I felt compelled to look up slash Google the term, one that I’ve heard, casually, as in “So, you’re probably going for the ninth wave, huh?”  No, I probably tend to go for the first or second wave; and I have tried to explain to people that waves rarely show up in nine wave sets.  Doesn’t matter.

So, evidently there is a book, “The Ninth Wave,” with some references to surfing in the nineteen thirties and forties, written by Eugene Burdick.  I haven’t read it.  Burdick died of a heart attack at age 46, in 1965 (the year I started board surfing, not that that is in any way ironic).

AND there’s a famous painting, “The ninth wave,” or, possibly, “After the ninth wave,” which I have seen, not in person, but on TV; described as probably the best marine painting of all time by, if I remember correctly, Rick Steves.  The work is by Russian painter, Ivan Aivazovsky, and, possibly coincidentally, it goes with the theme of this piece.  Since I already downloaded it, I figured I might as well display it here.

One thought on “Cold Days and Dark Waves”