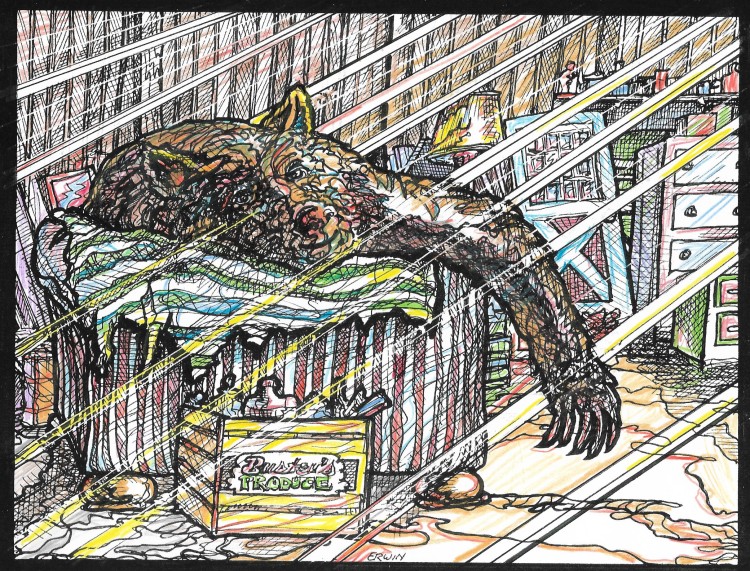 It might be considered ironic, to some, that I’m up early, working on a post that includes a drawing of a bear in a barn; an illustration that will, most probably, be our holiday card for this year; completed (as in color added) only last night; only to wake up this morning, and, in searching for the cell phone (and it’s still dark) I would swear I brought inside last night (but hadn’t), discovering an actual bear had decided to rip off and/or break boards on one wall (more like a fence) of the trash can enclosure I had built to keep him out; and had helped himself to whatever goodies (cat food containers that hadn’t been licked clean, for example) he found in the trash cans kept within the obviously-not bear proof yard.

And it’s not like bears clean up after themselves.

Bears don’t pack out what they… wait a second.  Rethink.  I’m kind of stuck on how much I will hate picking up scattered trash that had been neatly bagged, reinforcing the enclosure, hoping it’s enough.    Bears are… well, they are the true locals out here in the wilds of the Olympic Peninsula, out on Surf Route 101; sure, but this local (and he is well known, showing up on the “I’ve heard of Quilcene” Facebook page as he cruises up and down the various streams in a fairly wide area he, no doubt, considers his domain), but, really, he doesn’t have to get so, so surly.

I mean; really; can’t we just get along?

And besides; shouldn’t any self-respecting, non trash-can-raiding bear, at this time of year, be hibernating?

Shouldn’t we?  That or looking for winter surf.  If I don’t get this card printed and sent to you, do HOLIDAY JOYFULLY!