On those mornings when the surf was blown out, or too big, or too small, or too crowded, he would seek treasure along that line of packed wet sand between the south jetty and the much longer string of rocks that protected the harbor from just the type of sudden storm that, south wind still blowing, had pushed dirty wads of feathers and bubbles, ripped-loose strands of seaweed, odd chunks of trees from distant shores, into another line

In the first light of another too-early morning after yet another too-late night, he’d occasionally look up from this map of the farthest reach of gale-pushed waves, high tide and low pressure, eyes following the occasional set wave, from some farther fetch, clean, caught in the chop and windswell; rideable perhaps, in other conditions.

These waves would break into the deeper channel nearer the harbor jetty, the place where the excess force would be relieved in a river. Rip tide.

She was too near that river when he saw her. Or thought he did, rising. She was knocked sideways; trying again, clumsily, to stand, weighed down by pearls and diamonds and her second-best outfit.

Grainy light, everything grey; cutting wind and the remnants of his own fog. He ran, blinked, focused, tried to clear his suddenly-watering eyes. He met her knee deep. She fell upon him, the furthest lengths of her seaweed hair against him; one brief but deep look into his eyes before she, as if he was land, closed hers.

He knew her. Of all the magical gifts he sought along the ragged line, she was the one he most sought.

No, he did know her. Night before last, she was laughing, her hair alive, her shoulders moving so subtly, her eyes glancing away from the man she was with. She had caught his eye through the open window to the kitchen, caught him staring as he wiped a bead of sweat with his white sleeve, pushed another order forward.

He hadn’t looked away, filling in her biography with his own fictions. She wasn’t happy. She was also working; in a way; performing. He believed she recognized him; someone only occasionally free. Occasionally free. 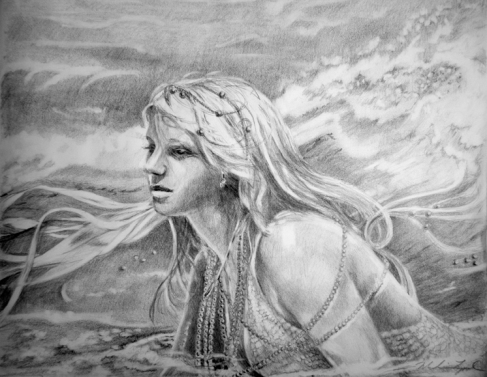 Wrapped in his sweatshirt and coat, she was mostly walking on her own by the time they reached the parking lot, empty except for his truck, boards mostly hidden in the bed. A break in the clouds to the east put just a bit of gold onto her still gray-green face. She leaned on the passenger door, then forward, puking more of the ocean onto the asphalt.

“I’m sorry,” she said, looking into his eyes with what he took for recognition.

Three vehicles, two with flashing lights, approached on the road from the harbor.

A Coast Guard boat sped from the farthest reach of the north jetty, racing sideways through the troughs and crests; circling back to the churning rip where a body of someone who fell off a pleasure boat caught in a sudden storm, might end up.

So, it was over. He tried to study her face; to remember; treasure found, treasure lost.

“Save me,” she said, shaking, still-cold hands moving from his shoulders to the door. Two bottles fell to the pavement. One broke.

The eyes of the man from the restaurant, from his car, as rescuers ran past him, moved, eventually, to the woman in the hoody in the cab. She looked directly at him; shook her head ever so slightly.

Opening the truck’s driver’s side door, he looked from the man to the ocean.

The illustration is by my sister, Melissa Lynch, professional artist. I hope to convince her to do more. While I started out drawing cartoons and surfing pictures, Melissa started out drawing horses. The story is exactly 600 words in length, and was originally written for the “Three Minute Fiction” competition on National Public Radio’s “Weekend All Things Considered.” I haven’t heard anything from NPR, and had certain boundaries not unlike those I required of my sister. Perhaps because I enjoyed writing the story so much, sort of plugging my friend Stephen into the male character’s part, some part of me thought, maybe, maybe it was good enough. As for Melissa’s drawing; couldn’t imagine one any better.