My sister Melissa’s son, Fergus, and his only Uncle who surfs, me, were out at the Cove at Seaside, Oregon. Rather, we were bouncing around on the inside, just past the rocks and before the long, long stretch of beach, looking for a few reforms.

He did the classic first-timer thing a few times, jumping to his feet when the wave had already passed. But, considering he had no beach training other than me saying, “Don’t drown,” he did quite well, standing on several waves. Goofy foot. Well.

Meanwhile, his mother and his Aunt Trish were on the beach, watching as the wind that, according to the kid working at the Cleanwater Surf Shop, had blown out the surf daily for the previous week, was calming, becoming almost offshore, and the real break was working. The real surfers were on it, moving down the line

Meanwhile, I was on the inside making sure the mid-west-raised and first-time surf adventurer, on holiday from college, didn’t drown.

Let me tell my joke now: “So, the rental boards are bright day-glo green, with a leash included. Why? So that, when the renter drowns, they can get their board back.” Pause. “Maybe with a body attached.” 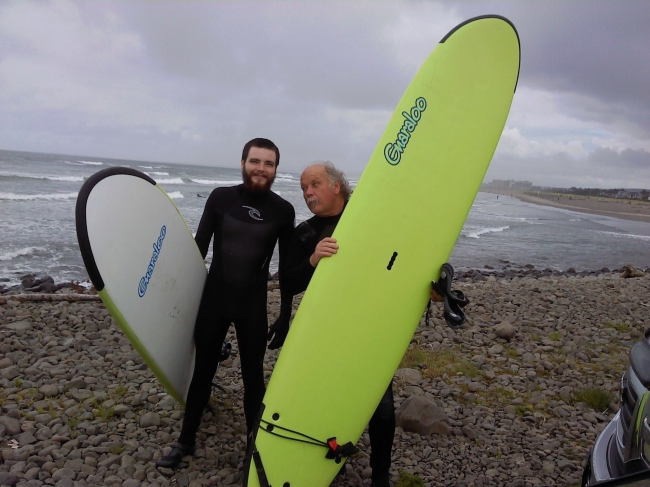 Yeah, I was also on a rental; something short of an actual soft-top.

This can be explained. My surf/work rig is at some extreme limit of its lifespan, and Trish wouldn’t let me put a board on the softracks on top of the Cadillac she inherited from her father, and it’s quite a ways down to my (and, yeah, Melissa’s) father’s house on the Washington side of the Columbia River.

I did get to put my wetsuit stuff (in a plastic bag) in the trunk, so, and this is important, I could pee in my own gear. Fergus, well, he’s polite, might not have actually urinated in the rented wetsuit.

That would be very polite considering the cute girl at the shop showed a real surfboard (fiberglass and foam, wax…real) as an example of a rental, but, when the guy loaded the boards on Melissa’s rental car (using my softracks), no. Classic bait-and-switch.

Still, with a critical audience watching, I hit a few quick reforms, side-slipped over a section or two on my knees, stood up a few times- not too much more successful than my nephew, he riding all the way to the sand, hands out or pumping.

Great. He didn’t drown. He surfed. This would be Fergus’s story to tell when he met up with another college friend over towards Idaho, they working on an adventure/trip back cross country to school and, well, the Midwest.

This part of her son’s plan would be a surprise to my sister, kind of a change to her itinerary, but, hey, she was there to witness this part of his future story.

But me, what I wanted, and quite badly, was to paddle the super floaty, poorly balanced, fat-railed pig board out into the lineup.

“Hey, would you call these waves, you know, good?” I imagined myself asking anyone out there. “This is fun. Is this a good wave for surf-boarding?”

And then I’d have to take off, and then, rip.

Maybe that’s why I didn’t try it. Not the taking-off part, the ripping part.

Maybe, but I’ll blame the day-glo board.

Maybe Fergus did pee in the wetsuit. That’ll be part of his story.

I would like to thank Melissa, again, for doing the drawing for my short story, which, sorry to discover, did not win the “Three Minute Fiction” contest that I’d entered it into. Melissa did put our daughter, Dru, up at her house downstate from where Dru works and lives in Chicago recently when her niece had a nasty bout with pneumonia. My sister does promise to do some more drawing, but with less restrictions from her dick-tatorial brother.