“First of all,” I said, standing in the kitchen of Phillip Harper’s parent’s house, two bars of paraffin wax melting in a soup can on the stove, Phillip’s board floating between two chairs and across the dining room table, “the theater was in no way ‘underground.’ Disappointing.”

Phillip and Ray Hicks seem to be properly impressed I, more country kid than either of them, had gone into the city for some other reason than to ride the escalators at Sears with my many brothers and sisters while my parents shopped.

It was at about this moment that Phillip’s sister, Trish (not my Trish- hadn’t met her yet), came in from the pantry (no one ever seemed to use the formal front door). She appeared noticeably disappointed that her brother and at least one of his geeky friends were there. Trish was followed in by her boyfriend, Bucky Davis. He was, perhaps, a bit less disappointed; a nod for Phillip, smaller one for Ray, even smaller one for me (standard cool reaction to over-amped groms). Bucky took a moment to check out the wax on the stove.

“You have to be careful,” he said, both hands simulating an explosion. “A candle might be a better idea.” A single hand tipping an imaginary candle illustrated the point.

“The thing is,” I said, trying to be informative, “kind of disappointing; it wasn’t at all underground. Just a regular…”

Phillip and Ray appeared less impressed than the first time they heard this.

“On University Avenue?” Trish asked. I shrugged. I hadn’t driven. “I saw it at State.” She paused, possibly to see if she had to add ‘San Diego State.’

No, I knew she had been spending some time down there, preparing to attend ‘State’ in the fall of 1967. Bucky would not be attending.  He was planning on going to Palomar Junior College; he’d have to go somewhere to stay out of the draft.

“When I saw it,” she continued, “Bruce Brown narrated it… himself. He was behind this curtain and…” She stopped because Bucky seemed a bit surprised, I thought, though I’m sure I was mostly trying to hide being impressed. And out-cooled. Again. Always by her. 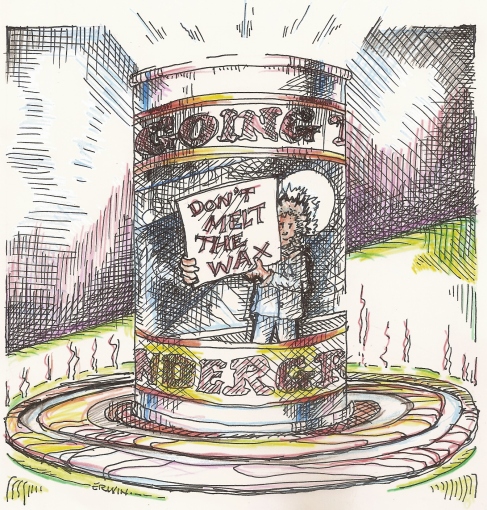 After all, it had been impossible to be really, even passably cool, at the above-ground theater, hanging with my older sister, Suellen, AND my mother.

Still, hoping to in some way compete, I said, “Yeah, well; they had these previews for a movie with Bob Dylan, and…”

“Huh?” Phillip and Bucky and Ray asked, pretty much at the same time.

“I guess. Yeah. And my mom starts laughing.”

“Laughing?” Phillip and Trish and Bucky and Ray all asked.

“Yeah, laughing; and… I mean, not even Suellen’s laughing. No one’s laughing.”

“Yeah, Bob Dylan; but, pretty soon, someone else starts laughing. And then more people are laughing; and then everyone’s laughing. And Bob Dy… Dylan, he just keeps dropping the cards. And…”

By this time, in the kitchen, I was also laughing. Phillip started to laugh. Ray, studying Bucky’s face, joined in the laughter. Then Bucky looked over at his girlfriend, maybe thought for a moment about how he didn’t see “The Endless Summer” at ‘State,’ with Bruce Brown personally narrating, and he laughed.

And then the wax exploded.