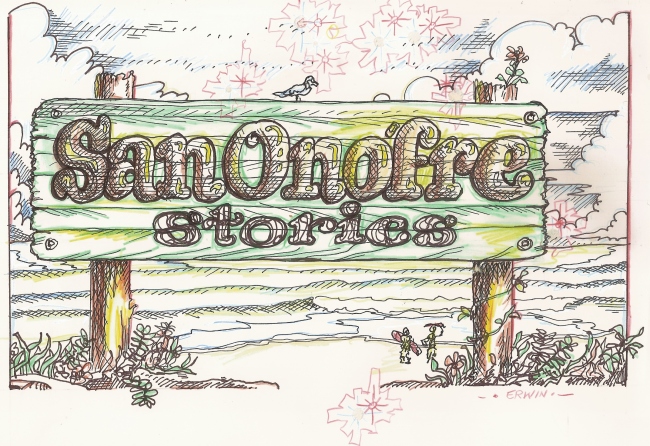 Early surfers parked on the beach, camped out there, built a few palapas, rode the rollers. It seems, to those of us reading the occasional story about this history in “The Surfer’s Journal,” checking the photos, a friendly sort of place frequented by people who saw themselves as rebellious and wild, but, by today’s standards, quaintly so.

Located (I know you know this) near the northwest point of the massive Camp Pendleton…wait. I should explain, just to be clear, that Camp Pendleton is roughly a triangle, with Oceanside at the lower point, San Clemente north, and, twenty miles inland (as the seagull flies) Fallbrook. That’s where I was raised, and, from my house, I always sort of believed, if I stood on the fence on the front edge of the property, and looked west, somewhere just over those coastal hills, that late afternoon glow was a reflection off the unseen water at San Onofre.

At some point the San Onofre Surfing Club made a deal with the Marine Corps allowing club members access past the guard shack, down a winding little road along a river (well, creek) bottom, and then past the railroad trestles (yeah, those Trestles), then near the Officers’ Club, the buildings a last remnant of a time when the entire area was part of a Spanish Land Grant. Nice location, in some trees in a usually sedate (wave-wise) cove right between Church and San Onofre.

Beach access was also granted to Marines, and dependents. In Fallbrook, most of my friends’ dads, or moms, or both, worked on the base or were Marines. Kids of Marines came and went, on some three year cycle. My family was in Fallbrook because, once there, my mom didn’t want to move the increasingly large family elsewhere. Though my father remains a Marine (of the Corps, to the core), he went to work splicing telephone cables all over the base for the rest of his career.

Children of Civil Service workers didn’t have (or weren’t supposed to have) beach parking privileges, and any other surfers granted access on the base had to park in a lot* separated by those whispy trees particular to windy parts of California. I think, of all the times I went to San Onofre, mostly between 1966 and 1969, whoever I was with got to park on the beach.

*On one of the only times I went with someone who didn’t have beach parking privileges, Bill Birt, whose father sold insurance in Fallbrook, Bill’s surf racks were stolen. That story, when this all gets organized, will follow this entry.

One thought on “SAN ONOFRE TALES”