My First Wetsuit- 1965
Because it’s December, because I’m thinking about what wetsuit items I need for the colder WINTER season, it seemed like a great time to relive a few things about my first wetsuit, the classic CALIFORNIA SURFER’S SHORT JOHN, custom fit in 1965, and purchased for the sum on $15.00, plus tax. Not to give too much away too soon. So:
BOOTIES- Very fine. My daughter, Dru, bought them for my birthday. Because I have a bone spur/bursitis on my heel of my left foot, I’ve been sticking with the zip up pair I bought from a dive shop in Bremerton, though I’ve ripped through the material in a few places. So, no new booties; I can take the tightness if I don’t have to hike too far.
VEST/HOOD- In pretty good shape. Fine. This piece adds an added mil of rubber for my core. It’s a bit tighter than I might like, but, well, maybe that’s something I can work on. No, not cutting it and adding more material.
RASH GUARD- It’s fine, does its job; could use a higher neck area, and it never seems to dry out. Yes, I could bring it in the house. Okay, no new rash guard.
3/2 MIL (or is it 4/3?) BODY GLOVE LONGJOHN WETSUIT, with back zipper- Broken string replaced with longer, sturdier shoe laces, this piece was purchased in a Seattle surf shop (I was doing a job in Queen Anne, it’s the shop by the Aurora Avenue Bridge) for about one hundred dollars (plus tax), and had been (lightly) used in the shop’s rental/surf school operation down at Short Sands in Oregon; so, though I’m sure it did contain some residue of someone else’s urine, it was probably a specialty tea drinker from some Portland office complex, trying to seem more interesting (“You do know I surf, right?”), and maybe (because it is big enough to fit me, maybe the renter wanted to lose a few pounds. Yeah, the suit is getting a bit thin in the places I grip to get it into position, yes, I have patched a few spots with material cut from my previous wetsuit… So, probably not getting a new wetsuit this year. And, incidentally, I did offer the folks at my local(ish) surf shop, NXNW SURF, in Port Angeles, an opportunity to sell me a rental wetsuit; the kid working probably didn’t pass the word on to Frank Crippen. Oh, and, as I did when I got this suit, I want my next one to be a size smaller. Working on it.
GLOVES- I have several pairs of worn out gloves. I definitely need new gloves. Santa? 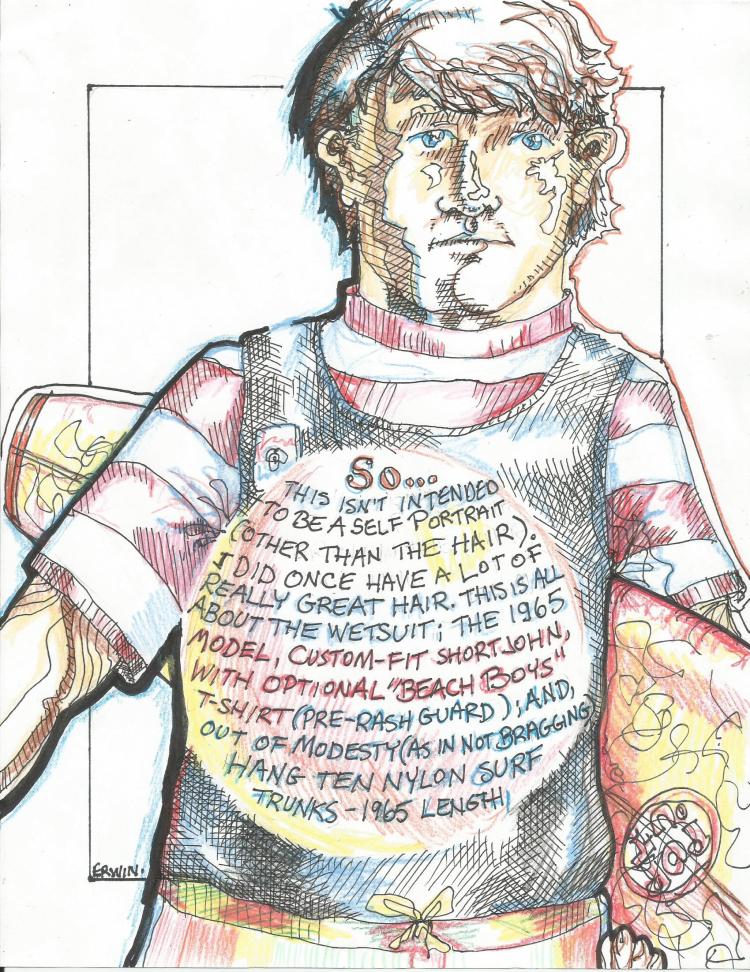 PHILLIP C. HARPER , my first surfing buddy, now Dr. Phillip C. Harper (I added this for when he googles himself), as with all things surfing, found out for both of us how to get proper gear for our first winter season as surfers. He may have already gone for his fitting, but was kind enough to go, after school, with my Mom and me to the shop over by Oceanside Harbor. It was somewhere around December tenth.
The date meant the wetsuit would be my main Christmas present. It also related to the unofficial (but very important) rule that REAL SURFERS don’t don wetsuits until the water temperature drops to 58, and cease wearing them when the temperature comes back up to the magical 58 degree mark, usually some time around Easter Vacation.
MEASURING- This is always embarrassing for a chunky kid. It was somewhat lessened by the fact that Phillip and I had both gone out for wrestling as freshmen at Fallbrook High, and we both knew he weighed somewhere around a hundred pounds, and I had started out the season at 130, but somehow, with strict dieting and exercise (and as much surfing as possible) had ended up the season at 136. Vertical growth, maybe. I got through the measuring, and we got to do some surfing before going back home. Phillip was the guy in a wetsuit. Fine; he needed it more.
STYLE- The wetsuit had no zipper, but did have a, new that year, stainless steel closing mechanism on one shoulder. Stylish and out of the way.
PERSONAL STYLE- Maybe it was more modesty than fashion that made me want to wear trunks over my wetsuit. I’m going to say it was, perhaps, consideration for other surfers who were more, um, err, modestly-endowed, because… anyway; I did soon discover that my Hawaiian Jams, all the rage (according to Phillip) would rip out even faster when worn over the suit. They just didn’t ‘ride up’ properly. But, this didn’t stop me from wearing a t shirt under the suit; sort of an early rash guard effect, though the extra layer did nothing to promote warmth.
NOWADAYS (and for a long time now) surfers wear wetsuits in the summer, even longjohn wetsuits in the summer. Hey, I’m not judging; it’s no longer cool to be cold; and, it must be said, wetsuits are better than ever. I rarely get as cold in water that drops to as low as 43 degrees, possibly lower near the rivers coming off the nearby Olympic Mountains, as I did in the depths of winter in 1966, clad in my Beach Boys (style) striped shirt, my custom short john with the stainless steel closure, and my first pair of Hang Ten trunks. Phillip, no doubt, pointed out the unofficial (but strictly enforced by peer pressure) requirement for real surfers to wear surfing trunks, along with my surf wardrobe of Levis (not Sears or Pennys) jeans, Pennys t shirts, and a properly-showy windbreaker.
Actually, I purchased a pair of Jantzen trunks before the Hang Tens, at the Men’s Shop in downtown Fallbrook, along with gym trunks and an (and I was so embarrassed to ask for this that I wandered around the shop for a long time) athletic supporter. Not wanting to be measured, the trunks (and I think they just ‘ran’ small) were too tight to wear even under a wetsuit; but the other items, with the ‘boys large’ stickers, fit fine.
Not bragging.
No, I don’t wear trunks over my wetsuit. I did mention how cold the water is, right? Colder for some than others.
Again, not bragging.

One thought on “My Custom-Tailored 1965 Shortjohn Wetsuit”