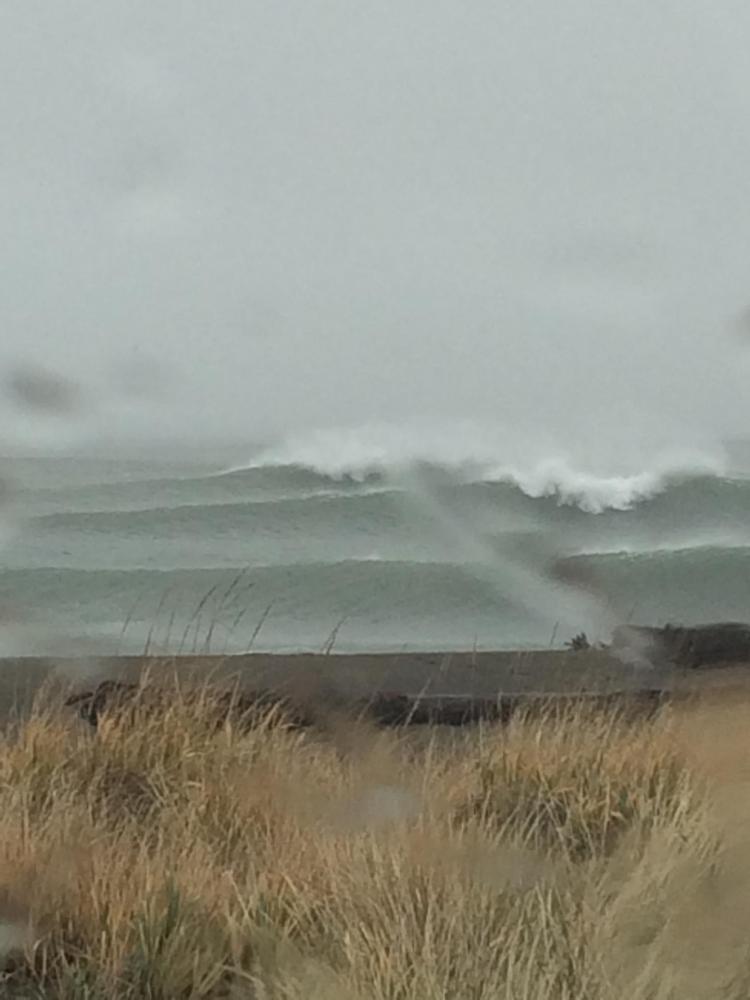 So, I was out in that northwest winter version of afternoon/almost-dark, sitting in my work van in a rainstorm, trying to see pretty much anything through the fogged-in (plus a couple of leaks) inside and the furiously beating-but-not-keeping-up windshield-wipers, somewhat desperately looking for any sign of surf.  Just as a small wave approached the two guys out, one of them (I think) rock-standing-while-waiting, an extra surfboard that was supposed to be on the low bluff blew over the small bluff and into the shorebreak.

Actually the shorebreak was the only break.

Hey, maybe tomorrow the Pineapple Express will make a little jog, and, whoa!

So, since I didn’t recognize the vehicle two down in the parking area, hence, didn’t know who the surfers in the water riding waves even I couldn’t quite get up the enthusiasm to ride, I called Keith, gave him the report. I had checked it early, ‘flat;’ Keith at mid-day, flat, with ‘some lines showing,’ and now I was checking it again, ‘pretty flat, offshore, though; with two guys out.’  I called Stephen (you remember, the hydroxexual) Davis, got his voicemail, told him Keith and I are still looking at (oh, I can’t say, do your own forecasting), invited him along. Then I called Trish to tell her I’d be home earlier due to a lack of surf to ride and a lack of desire to go back to my job. Then, heading to the Penny Saver for some of that almost-like-homemade salads, I gave Adam “Wipeout” James a call, just to make sure it wasn’t him and one of his friends out in the cold chop, not catching many ‘head high’ waves.

Yeah, because the waves are always ‘head high’ in Adam’s reports.

But, it wasn’t Adam and a friend I’d seen, unless they got out, Adam checked his voicemail, and called me in the four minutes since I left the parking lot, and called me. He mentioned another friend of his had been to Westport today, and that he’d sent him a photo which he’d send to me. Yeah, the one above; high tide, semi-offshore, no one out, and, of course, ‘head high.’  Of course.  Thanks Adam’s friend.

Hey, I only posted something, like, yesterday or the day before, but, sure, this is news. Sort of.

Still, if you don’t have the time or inclination to check out the last post…