I heard about the photo before I saw it. “It has to be Keith,” Adam “Wipeout” James told me. Then we all met in the water, Adam mentioned it to Keith. “Could be,” Keith said. Then he sent the photo to Keith and me under the heading, “Either of you recognize this hooded surfer?” Then…
7/21/15
To: Adam James
I don’t immediately recognize the surfer in question, but the photo is my new screensaver.
Who sent this shot? It’s so clear, so up close and personal.
It’s like, um, Exhibit #1, misdemeanor drop in, with felony attempted assault with a deadly SUP.
And what about the paddle?
I think it’s self defense as the defendant claimed.
The photo really needs to go on realsurfers.net.
Erwin
Keith Darrock
7/21/15

To: Adam James, Erwin and or Trisha Dence

?That’s classic! Yes, that’s me getting dropped in on by a large, helmet wearing, SUP rider. I totally remember that wave/day well. It was last winter around Christmas when Erwin, Steve and I rode out together – getting a speeding and non-seat-belt wearing ticket in route. I think you came later, Adam. The waves were solid but it got really crowded fast. I had been on that wave since the top of the point when she blatantly dropped in on me without looking about half way down. The shove was purely out of safety.
Adam James
7/21/15
To: Keith DarrockCc: Erwin and or Trisha Dence

No idea who the photographer is. I just saved a screen shot from his instagram feed. I was sleuthing surf shots last  Saturday morning while the kids were snoozing, having coffee and thinking about all the surf I was missing and I just happened across it.   AJ

Actually, I have seen the woman in question out on the Strait several times. The first time I desperately wanted to tell her, “Your Mom’s not here; you don’t have to wear the helmet.” The second time was probably on this day. I was pretty busy having lost my board after my leash got ripped loose, first thing in the morning. Swimming with a paddle isn’t all that much fun, with the high tide causing a big beach swirl. My board, which had been caught in the rip, was rescued by Big Dave (thanks, BD). I was not quite my confident self for a while after that, knee-boarding on a few waves I would have (really) stood up on; and then it got crowded.
Still, Dave and Stephen and I were getting waves, though Brett, electrician from Port Townsend, got vocal with a longboarder with a shamrock on his board who was going for the best of the set waves, and actually (I witnessed this) pushed Brett’s board back as the guy on the smaller board tried to take off. AND, Adam just reminded me, a kayaker with a sparkly rig (not common at this spot) and Mr. Wipeout had a bit of an altercation. “Oh; yeah; I’d forgotten that.”
And, of course, there were other surfers clogging the inside, resulting in several other near-misses. And, of course, there was the speeding ticket for me (I went to court and got it reduced) and the no-seatbelt ticket for Keith (he paid it, his wife, Marley, temporarily banned him from riding with me- yes, I should have had the back seat belts out); AND half the surfers on the beach witnessed the pull-over. “Man, when I went by you were spread eagle on the side of the car.” No, I was trying to fish out the belts.
It seemed everyone was at that spot that day. Later, Jeff Parrish, who no longer prowls the Strait with me, sent me a video entitled “Kneeboard Magic,” featuring me, three bottom turns, three speed sections, and a clean pullout. You’ll have to take my word for it.
AND, the last time I saw the helmet-wearing SUP rider, her surfing had improved, and, since she hadn’t (though others had) dropped in on me, after I got dressed and loaded-up, I walked over to give her a couple of words of encouragement. Really. 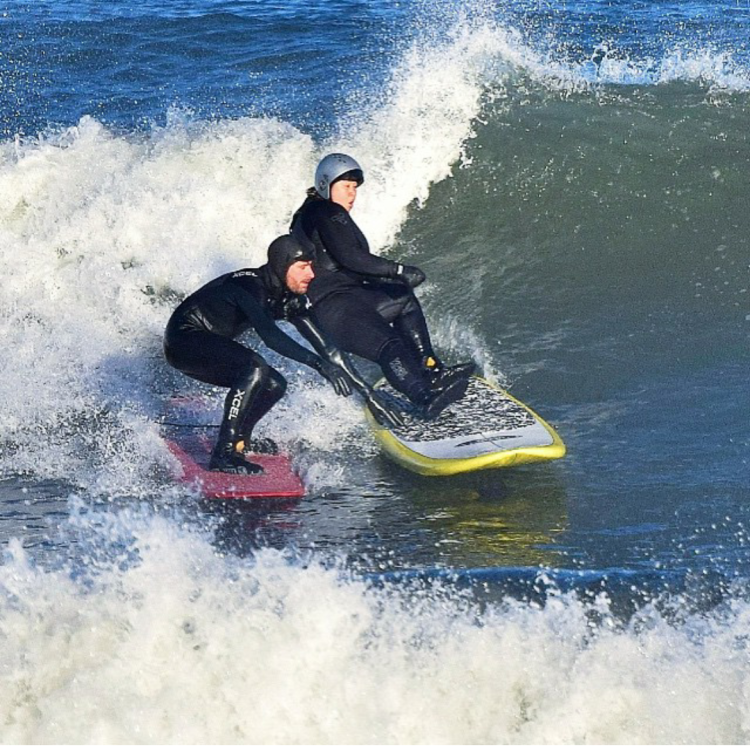 2 thoughts on “Drop in on the Mild-Mannered(?) Librarian, and What do you Get?”