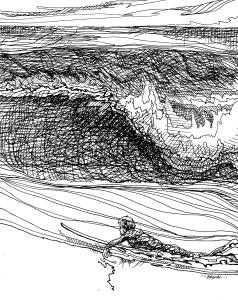 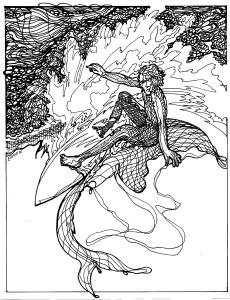 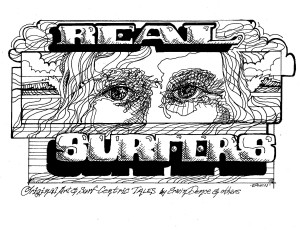 I’ve been working quite (surprisingly) hard recently, doing some writing; some drawings; some cartoons, some of which I hope might show up in “the New Yorker” (and all will undoubtedly, eventually show up here); and shipping off and working on the realsurfers coloring book. My sister, Melissa Lynch, has been helping spread the word on Facebook.

With the difficulty in convincing anyone to have painting done this time of year, the surf either not happening or not at the right angle for anywhere close, the ground frozen and the temperature brutal, I’ve been trying to do what I can to advance my artsy career, such as it is. 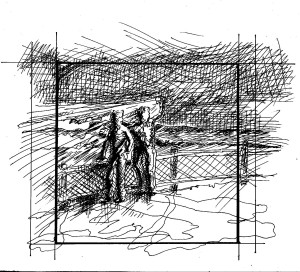 Still, I’m behind on my (okay, once, I’ll call it a…) blog. I have some news and some photos from Hydrosexual Stephen Davis, last heard from wayyy down in Baja, and have some new drawings to add to existing stories “Inside Break,” and “Locals Only Kooks Go Home.” I am working on editing the coloring book down to 48 total drawings (cheaper to ship), checking into setting up a PayPal deal so people can buy the book, and cleaning up my site. Keith Darrock may be helping me with this (we’re negotiating). Keith, Associate Librarian in Port Townsend, is also working on planning for the Third Occasional Surf Culture on the Strait of Juan de Fuca Event. We’d love to get William Finnegan, Pulitzer Prize winning journalist and author of “Barbarian Days,” involved, live or (maybe, even) on Skype. If you have any influence (and we’re reaching out to surf journalism legend and Surf Culture headliner Drew Kampion for help) in getting (just guessing at his surf nickname) Willy Finn involved; yeah, use it.

So, shit’s happening; and if you’re promoting/linking/doing anything that’s helping, thank you. Since the start of what may or may not be a virus, Trish, long stating that Facebook is her thing, not mine, has been helping get some stuff on the Facebook site our daughter, Dru, set up. I think I’m at Erwin Dence, Jr, Facebook-wise, and I’m also at realsurfersdotnet@gmail.com.   So, thanks; I’m getting back to work. 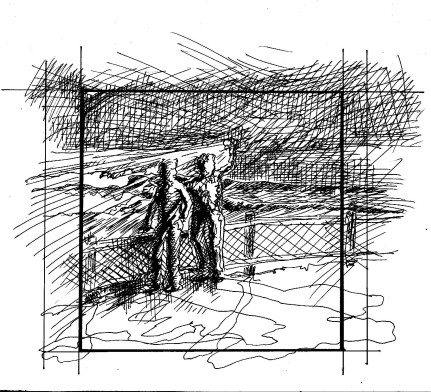