FIRST, let me say I’ve been doing drawings of what amuses me for a long time. Somewhere in the early eighties, bored with my Civil Service job as a painter at the Puget Sound Naval Shipyard in Bremerton (having transferred her from the Public Works Center at 32nd Street Naval Station in San Diego as soon as I could after they moved/promoted me from a temporary to a Career-conditional employee), I, along with working on a novel (during breaks/lunch- mostly reading new stuff to other bored workers), put together a little collection of cartoons under the loose title of “Absurd Delusions.”

None of my co-workers thought any of the cartoons were funny. 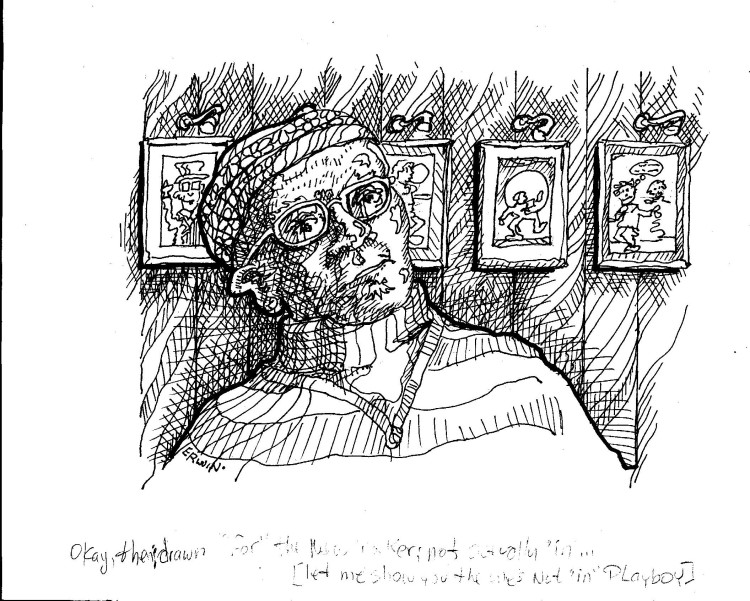 The caption is, “Okay then; drawn ‘for’ the “New Yorker,” not “in” the “New Yorker.”[optional] I also have some that weren’t ‘in’ “Playboy.” ” A reasonable explanation for my new drawings as I solicited feedback.

SO, HERE’S THE DEAL: A couple of months ago, while working on my Realsurfers Coloring Book, and possibly because I’d heard that several cartoonists for the “New Yorker” had died recently, but mostly, probably, because I (along with thousands of others, no doubt) got an e-mail from Bob Mankoff, the cartoon editor, inviting me to get more involved with the magazine (I had entered the caption contest a few times; never really came up with a killer line for anyone else’s work- gave it up).

WELL, sure. I had a few ideas, found out the submissions are all handled online nowadays, e-submitted, maximum of 10 original cartoons per month, nothing that had been previously published, even in a blog/website like this one.

I just submitted my second batch of brilliant cartoons on the 14th, so, though I never received confirmation that they hate/dislike/don’t get/ don’t want any out of the first set, I’ll have to assume it’s safe for me to display some of them here.

Big fan of “New Yorker” staff writer William Finnegan’s Pulitzer Prize-winning book, “Barbarian Days;” a surf-centric biography by a Real writer who lived/lives a real surfers life. I was kind of hoping someone in the cartoon department might just… you know, pass it on. If not, expect to see the “I was different” line again. And, yeah, there’s some kissing-up obvious, some jealousy quite possible. Port Townsend librarian Keith Darrock, and I, having already solicited legendary surf writer Drew Kampion for help, are hoping to persuade Billy Finn, Finn-o, to participate, even if it’s by Skype (my backup plan idea) for the Third Occasional Surf Culture on the Strait of Juan de Fuca Event.

ACTUALLY, one of the first drawings I did was an update on the classic R. Crumb “Keep On Truckin'” drawing, imagining the character 48 years later. I thought of this, possibly, because my drawing style, cross-hatch-based (though I claim to have made some kinetic line changes), and which anyone old enough and real surfer enough to remember it, is directly linked to the “Surfer” magazine drawings by Rick Griffin. Still, my style is often compared to that of Mr. Robert Crumb, a contemporary of Mr. Griffin’s in the “Zap Comics” and ‘underground’ era of the late 60s.

SO, I wasn’t planning on doing this right now, maybe still hoping the “New Yorker” will come to their senses, but, since I’ve gone this far… No; I’ll give them a few days. I did write to Mr. Crumb, seeking his permission to use his image. When I got this response I was… I was so thrilled. So thrilled.

HMMMMM; I have to re-scan Mr. Crumb’s email and my response. That means setting up the scanner and… I’ll take that as a sign. Not really, but I’ll update this in the morning. No, really.