…possible the illustration could be described by some other word that is, itself, defined as an image with an almost equal amount of black and white.

I discovered this ‘equalness’* when I took the original drawing, the negative of this image, to a printer to be reversed. I didn’t have that version reduced, so I can’t show it here, but, probably because I just can’t leave space, black or white, bare; the amounts of toner necessary to print either version, according to the guy behind the counter, were pretty much the same.

*I wanted to use the word ‘equanimity’, but, when I looked it up, it referred to a state of calmness despite whatever existential craziness is going on.

You’re right; I didn’t have to use the word ‘existential.’

SO, this one probably won’t become a t-shirt. Like everything; art, writing, paint contracting, marketing of art and writing; I’m still working on it.

AND trying to maintain some level of equanimity-ness. 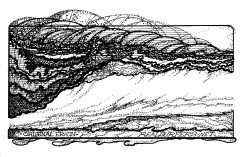