Greetings from Doctor Pervertius Speculus and his dear woman… well, actually I forgot Oceanna’s stage name, and I’m not actually sure of Stephen’s stage name.  Oh, and I’m also not sure if Oceanna is spelled with one n or two.

However, I do have a photograph of the couple from last weekend. 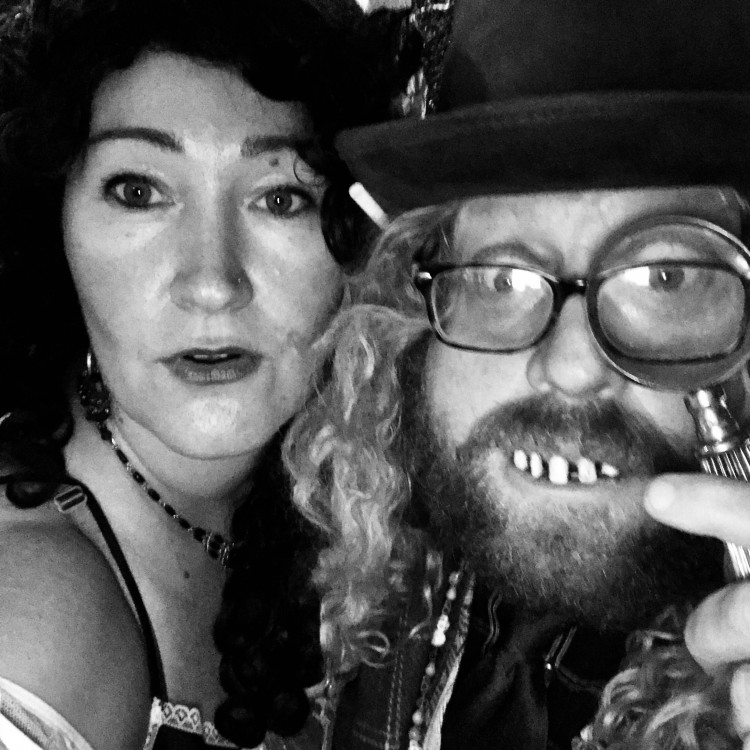 According to Steve, a woman came up to him at one of the (at least) two events the couple participated in, first saying his teeth were disgusting (rude), and then asking him what he was supposed to be.  Rather than giving a sarcastic answer such as, “I was supposed to be a rude and judgmental elitist snob,” Stephen claims he said, “I’m a per-vert!”

I’m a little disappointed that you can’t get the full effect of this with my mere extending of the word.  Steve would have, no doubt, delivered it with a bit of salacious eye-rolling, perhaps an in-character ogling of the woman who made the comment.

Hey, I wasn’t there.

ANYWAY, Stephen and Ocean(n)a are now partners and owners of THE CELLAR DOOR, an already-established nightspot in (under, actually) Port Townsend.  Steve, with years of experience as a restaurant owner and chef, has been sorting through ideas for the menu. Oceanna has experience in the bar/restaurant trade (evidently selling liquor is kind of important, revenue-wise), and has many contacts among local entertainers.

THE CELLAR DOOR has been a top venue for live performances in the city for quite some time, and will be reopened as soon as all the liquor license paperwork gets done.  Again, important).

The effect on Steve’s surfing might not be too detrimental.  Most of the surfing in these parts is done in daylight.  WE’LL SEE.  I’ll keep you posted.

MEANWHILE, I did have a bit of an issue with my latest ORIGINAL ERWIN T-SHIRTS.  I had twenty shirts, various sizes, ready for screening.  After screening the graphics on the back, it was discovered, while doing the logo on the front, that the image was, OOPS, upside down.  ERRRRRRR!

SO, I’m holding on to a couple, handed out some more, and took the four rightside-up shirts  to TYLER MEEKS’ DISCO BAY OUTDOOR EXCHANGE.  I (we) have a bunch of shirts at the screen shop, and, hopefully, today or tomorrow, I can pick them up, ready for sale for the weekend.

I will get some more of this batch of ORIGINAL ERWIN shirts, and, since they are, by design, all limited editions… I don’t know; I’m hoping that means something.

The DISCO BAY shirts will have the shop logo I designed on the front, with one of two images on the back.  There are a range of sizes and colors.

If I get the shirts I will immediately post this on this site, right on top of Steve and Ocean(n)a.  No offense.