Does this drawing make me look gay? I only ask because, going back to do some work on it, adding the black lines (and I should add that the color, in person, is more intense and the lines that form the border are actually even on all four sides), I asked my wife, Trish, as I usually do, what she thought. “Pretty,” she said. Then she chuckled. “Is it meant to be… um… a gay wave?” “What? No. I just wanted to add some rainbows on a wave and… oh; now I see it.” This started a conversation that made me ask her if the rainbow lei, the faded one that’s been hanging, along with a Saint Christopher medal and a long-worn-out scenty thing, for about a hundred thousand miles, on the mirror in the old work/surf van, which had originally been her mini-van (way cleaner, didn’t smell like paint OR wetsuits)… um, is that a… I mean I always just thought it was, you know, Hawaiian… it’s not… I mean, would someone think that…I mean, it’s not, like, a rainbow coalition-y thing?” 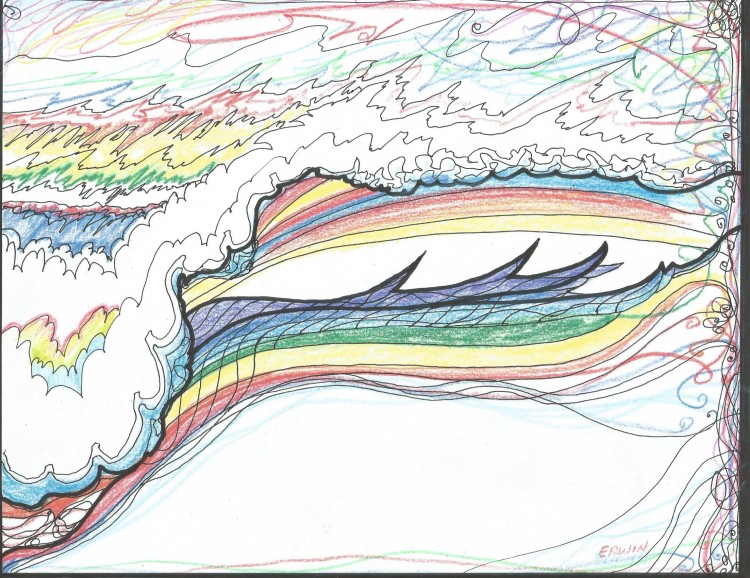 Yesterday, in my new surf/not-work wagon, I was looking for surf on the Straits of Juan de Fuca. There’s been a serious lack of properly-aligned swell for most of February, and, though I’d almost decided to trek the extra hour or so to the coast, it looked like the waves might just cooperate at the second secret spot I checked. So I hung around, thinking how the coast has been the place to go all this winter; offshore winds, reasonably sized waves… no, I’d go out here and catch a few, maybe my timing would seem, once the long peelers started hitting the reef, brilliant.

Didn’t happen. The same east wind that was blowing against the open palms of the broken lines approaching the shores beyond the farthest headland I could see, out where the sun had already broken through the squalls; that same wind was reeling around the little point, ripping scars into the weak energy pockets I was trying to harness. I don’t give up easily.  ‘Exercise,’ ‘practice,’ ‘just had to get wet,’ take your choice. ‘Desperate’ is another motivational catch phrase.

And the wind got stronger, soon howling across the swells as they moved past me, sideways, tops blowing off. Once I got my fill of practice and exercise, once I had gotten wet and was no longer as desperate, using my car as a buffer, and just as I was about to lean over to grab my hoodie from the front seat… woosh! Whoa! Head dip! My big ass board flew over me, landed eight feet away.

The duck and tuck was the best surf move I’d made all day. And I did get home in time to check the buoys and the camera at La Push (not a secret spot). Swell up, direction better, and that same east wind that would bring better weather today was grooming the outside peaks. Brilliant.

“Maybe my mistake,” I told Trish about the time I realized the contest at Snapper Rocks had been on line for hours, and Kelly Slater had already lost in round one, “was I went too early.” “Oh,” she said, in sort of a mock-caring tone, “and now it’s almost dark.” By the time we had the discussion about the gayness, real or imagined, of my drawing, the women’s surfing had started. Full screen. Full color.

Trish looked at a replay of a woman in a bright orange bikini bottom bottom-turning into a decent walled-up section. She looked at me. “It’s Hawaiian,” she said. “What? Oh. Uh huh; I thought so.”

Hey, take a few minutes, when you get a chance, and check out ‘Inside Break,’ the novelization, a couple of place down from here. Thanks.