I’ve been trying to come up with a line that conveys the message that there are never any decent waves on the Strait of Juan de Fuca; or if there are, they’re rare fickle and probably not worth the effort of looking for them. Everyone who has tried a few times has been skunked on a percentage of these trips. The drawing is utter fantasy. Sometimes the waves are, too. 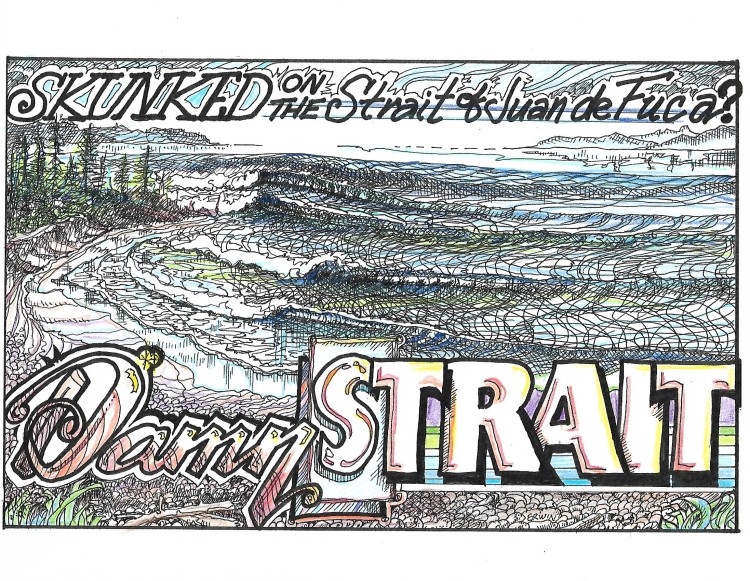 I’m also always trying to come up with a slogan for realsurfers.net other than “shoulder hoppers and name droppers.”

As with everything, working on it. Since I fired up the printer/scanner, I figure I should add at least one more so I can do a medium size; something one can look at without moving the image up and down. The waves may be going off right this minute. Somewhere, they no doubt are. 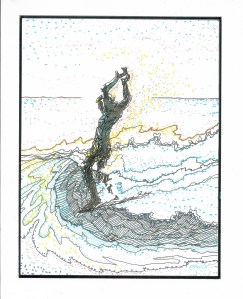 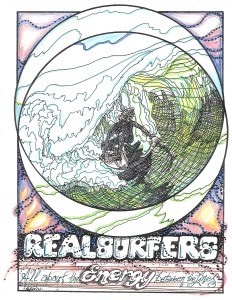 Not that it’s all that relevant, but, after getting the drawings reduced and a couple of copies at the Fed-Ex/Kinko (unless they’ve dropped the Kinko altogether) yesterday, I made some inquiries as to what it would cost to put together a little book of illustrations. I discovered that… well, my second or third question was, “Then how does anyone make any money with books?” “Um, maybe a… printshop? Volume? Um; hey, we don’t know. That’ll be $3.66 for the copies. Oh, and you have some pens?” This morning I discovered the pens that make that in-between line I really need, the two-pack… blue. Not black. Blue. Blue like one gets from a trip to the Strait. Maybe the good kind of blue. Damn, I could have been there by now.

Sorry, I was just interrupted by Adam Wipeout. “I think it’s firing.” Bluer.

2 thoughts on ““Damn Strait” and “Energy Between the Lines””