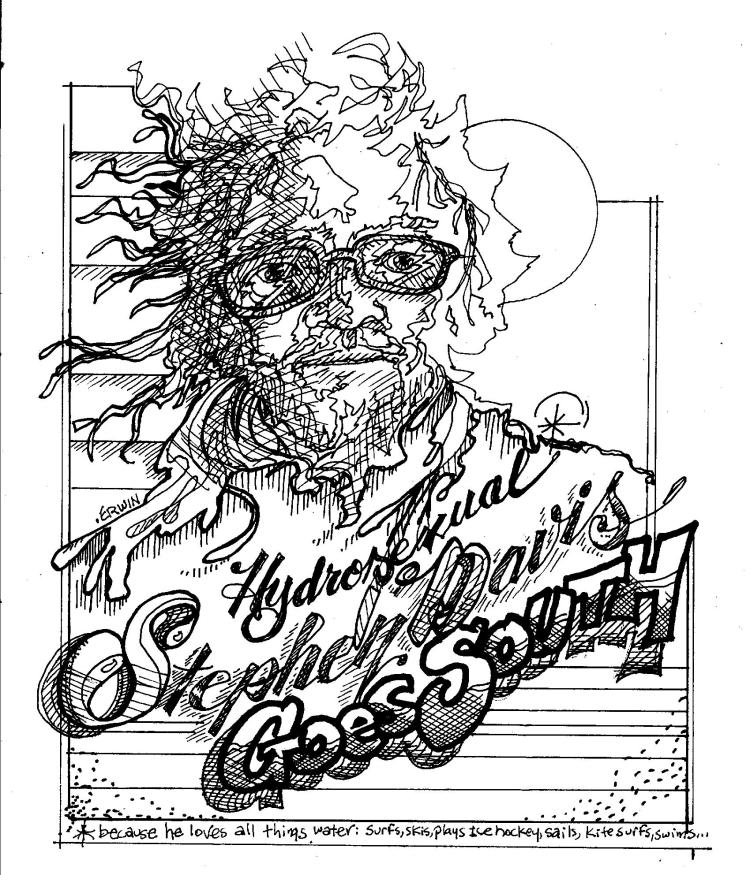 Here’s a spot. Evidently not a secret spot. Steve did not surf here with 50 or more other rabid, aggro, or merely fun/crowd loving enthusiasts; but, rather, surfed a pretty empty lineup without a lot of other position-jockey-ers. When I asked him how he could find an uncrowded spot, he said, “Hey, I’m not from around here; I don’t know why everyone was out there. I don’t understand at all.” 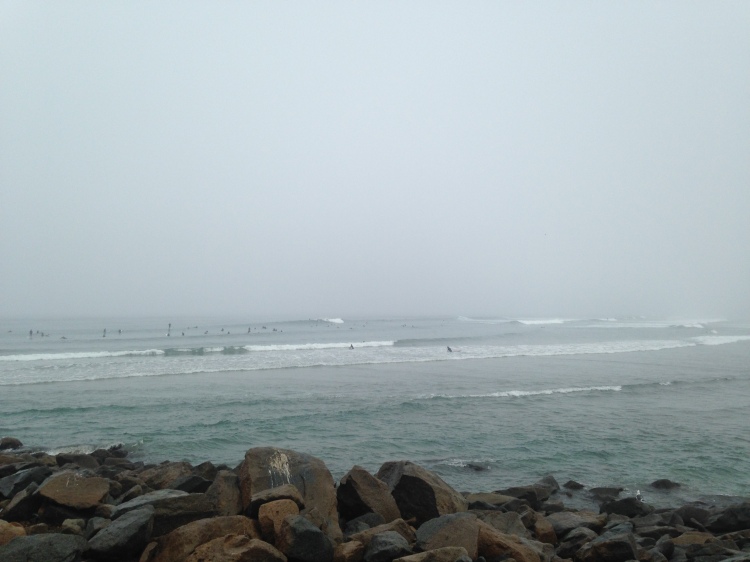 There are a couple of other shots with landmarks that might reveal which spot this is. No, it’s not Seaside, even on a Saturday, but is south (I think) of Santa Cruz. Okay, it’s Morro Bay (probably). I spoke to Stephen later, when it was already dark up here, still light, but foggy, at a break he was watching. I think it’s Cayucos. 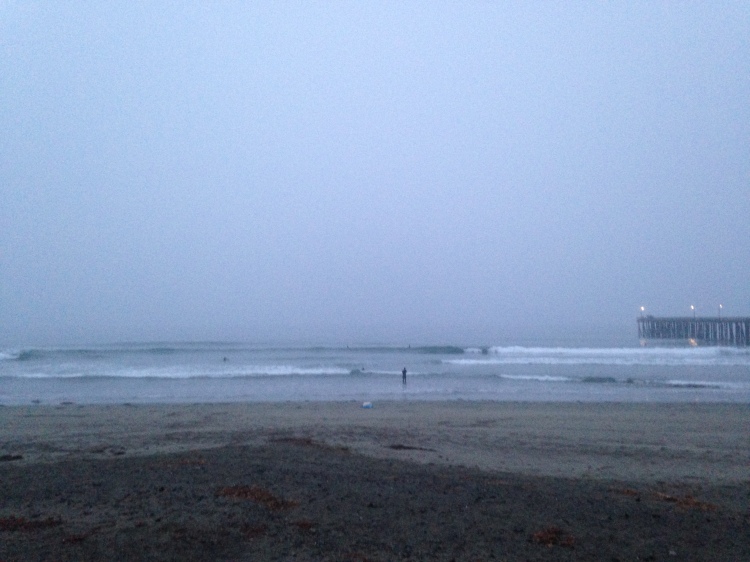 Below is a shot of Steve pig-dogging a super-top-secret spot in the PNW, aka GNW.  As in, Rarely but rarely (and not currently- rarely, rarely) great. 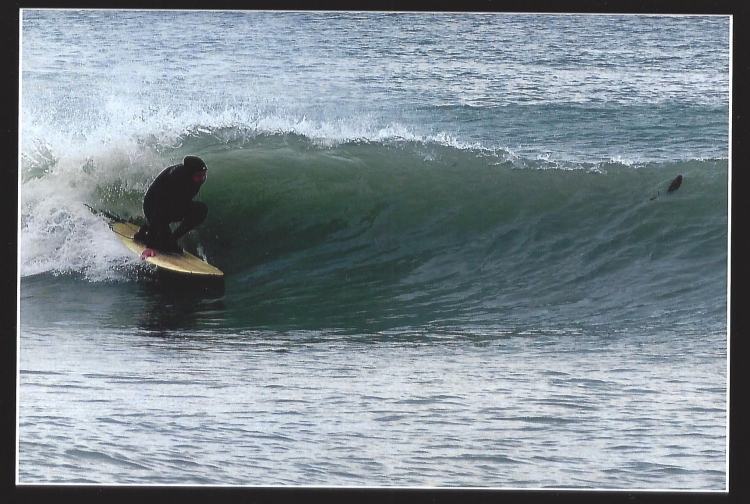 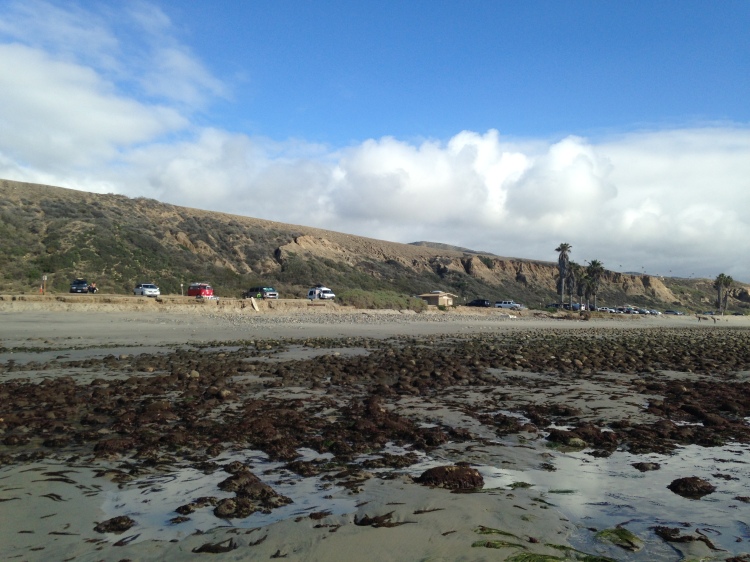 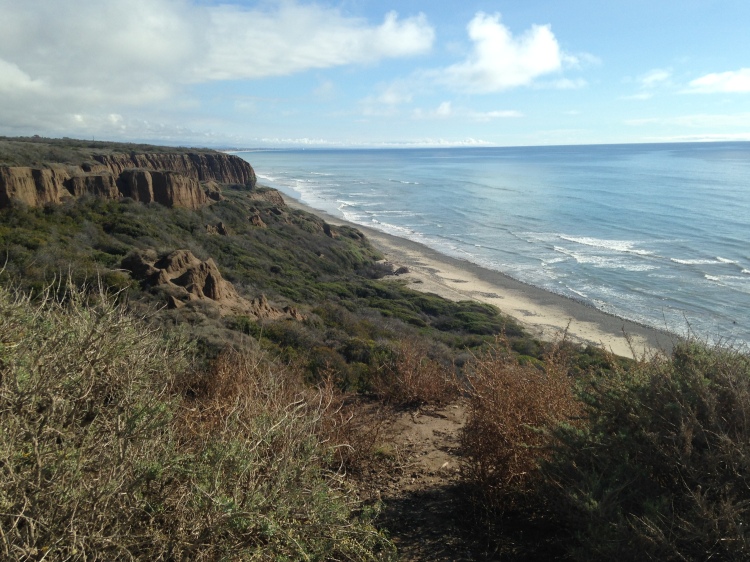 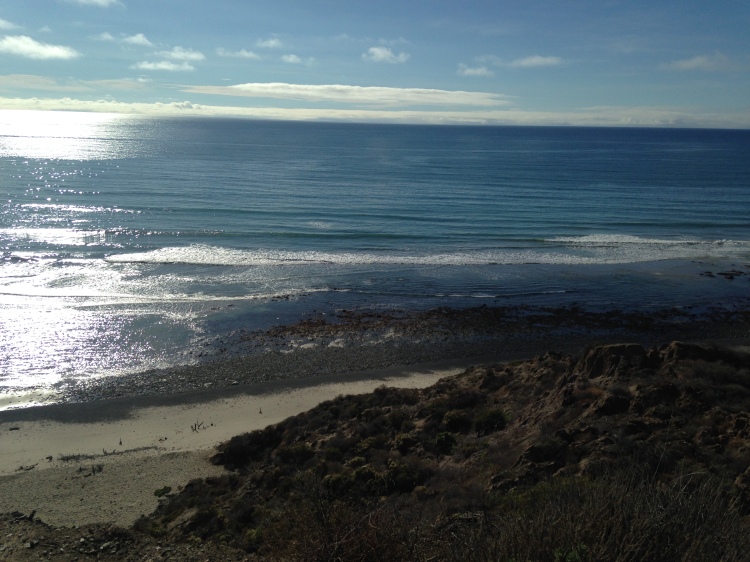 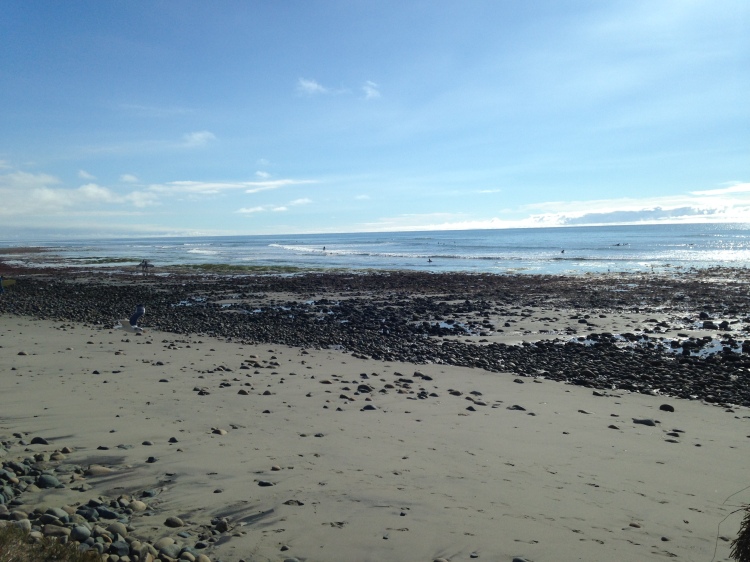 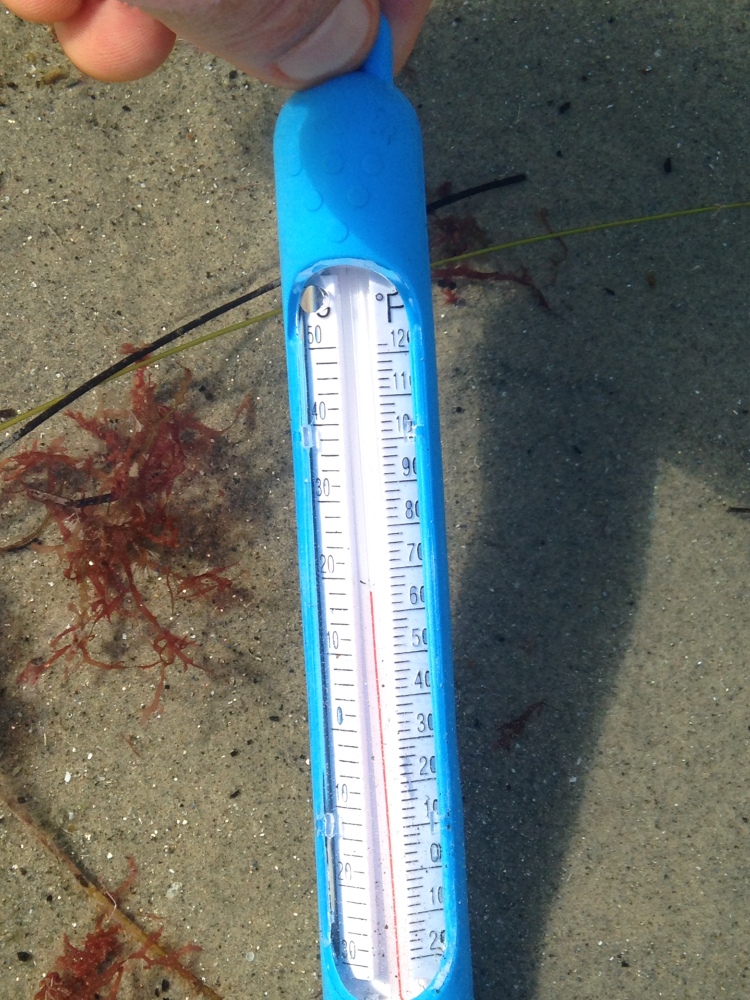 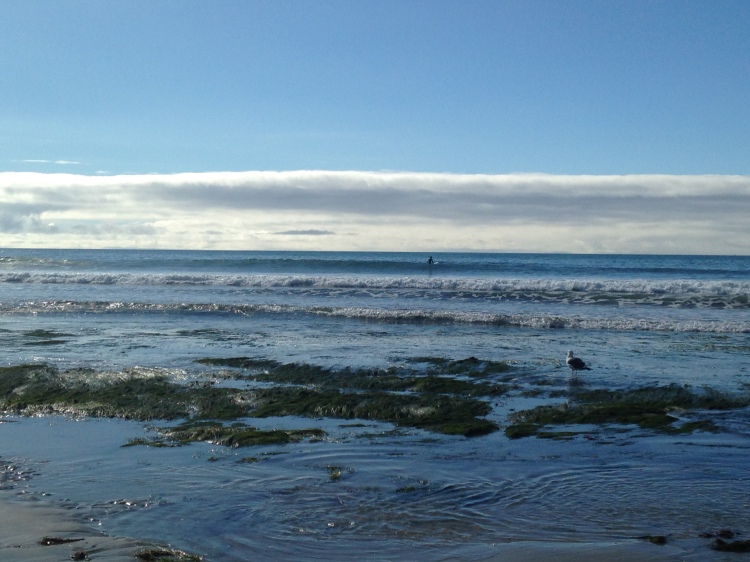 UPDATE: 12/12/16- Steve, his van in long term parking, is enroute to Hawaii. He and I had talked about Swamis and Pipes and other North San Diego spots. He was a bit confused about where actual Pipes is, but did hang out on the fence on the bluff for a while, surfers doing the ‘talking story’ thing in the parking lot. Unable to find parking at Swamis, obviously not breaking, with “some sort of circus or something, people doing yoga under the trees… kind of confusing what was going on there.”  Here’s a shot from the bluff. I told Trish that maybe it’s my old friend Ray Hicks and his wife, Carol, strolling the beach. 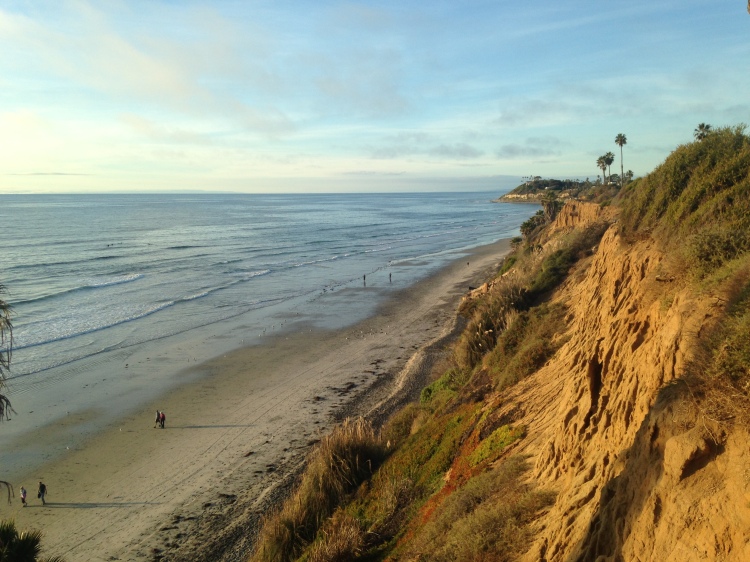 UPDATE- 12/14/16- Having flown out of San Diego early Monday morning, Stephen is in Hilo, Hawaii. I called him this morning to see if he’s watching the Pipeline Masters. Yes. Surfing? Yes, but mostly body surfing. I asked him to send me a photo of the shop Oceana’s father owns. “Haven’t gone there yet.” “Why not?” “Too busy.” “Where are you staying?” “Next door to the shop.” “Oh… sure. Maybe you can take a photo?” “Okay.”

Here’s a photo of a beach. I already forgot the name. Probably, judging from the heads of those in the beach chairs, heavily localized and probably secret. 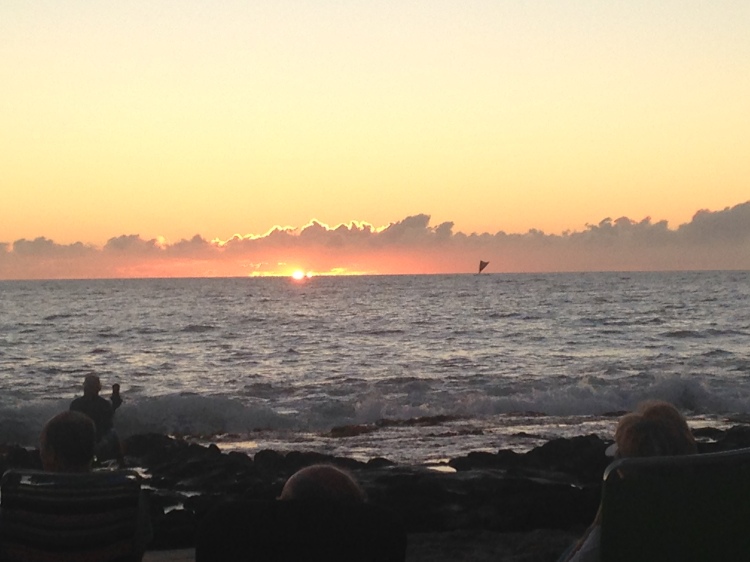